A brewery, a tour and a tap room

Recently, I paid a visit to the Concrete Cow brewery in Milton Keynes, did the Fuller’s Brewery tour and enjoyed a few beers at the York Brewery tap room – this is what happens when I have time off work!

My parents live in Milton Keynes and have done so for a number of years, so, every so often I provide a taxi service for my son to see his grandparents (let’s not kid ourselves fellow parents, it’s all about the grandchildren) .  For those of you that aren’t aware, Milton Keynes is renowned for the number of roundabouts along its roads and the concrete cows that were created in 1978. It is after the infamous cows that brewer and owner Dan Bonner named his Concrete Cow Brewery in 2007.
It is also a bit of a beer desert, Wetherspoons being the exception to the rule.
My son and I took the short drive on the Saturday after midday from where my parents live to the business park where Concrete Cow are based, found the unit, parked up and briefly wondered if the place was open, however, a quick tug on the handle and push on the door revealed that it was indeed open to visitors. Dan was there with another customer/friend/fellow brewer discussing all things beer, I said hello, introduced my 15 y.o. teen and myself, whereupon I was offered a generous tasting of the new lager being produced – MK67. The lager comes in at 5%, and, is a soft almost creamy well balanced beer, hoppy with a nice bitter finish.  The name comes from MK for Milton Keynes and 67 as it was in 1967 that Milton Keynes as we know it was born. Next up was a can of MK IPA, a 5% American IPA, this was really enjoyable – soft, zesty, well balanced (which I think is a feature of their beers), with a rather smooth finish. This was the 7th batch produced and seemed, by all accounts to be the best yet, so, I purchased a few (when I say a few, I mean a few six packs). I also took home a few bottles of their real ale, the Pail Ale I found to be clean, crisp, bitter and refreshing. 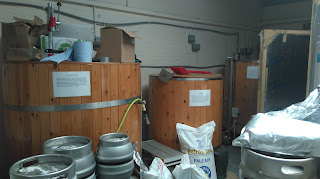 It was nice to spend time in the brewery with Dan and his mate, plenty of beery chat was had by all (with the exception of my son, who probably switched off when I said “hello”), I will be popping in again in the near future.

Read more about them here: http://www.concretecowbrewery.co.uk/brewery/

A couple of days later, it was time to tick off the Fullers Brewery tour from my “big beery to do list”. My girlfriend Michelle, had purchased a brewery tour for two as one of my many great Christmas presents, so, off we went to Chiswick together for the 3pm tour. Always ones to ensure that we arrive on time or early, this meant time for a swift one on the Mawson Arms named after the owner Thomas Mawson, who owned the original brewery on Fullers site.  I had hoped to find Chiswick on cask so close to the brewery as it is one of my favourite session ales, I was disappointed. I plumped for a 330ml bottle of Pale Ale, which I must admit I hadn’t seen previously – it wasn’t too bad, refreshing and sessionable @ 3.5%. The pub itself is nice and the food looked good, only thing lacking for me, was a wider range of the Fuller’s beers, being as it is so close to the brewery.
Then our guide turned up, a gentleman steeped in Fuller’s history, limping along somewhat with his crutch (the exact nature of the injury was never shared, but, it was his first day back), despite this he seemed fairly sprightly to me, I put this down to the London Pride, which was declared early on to be his absolute favourite beer, EVER!
I won’t go into detail about the history and heritage that seems to emanate from every nook and cranny of the brewery, it as potent and tangible as the smell of beer, but, you can read all about it here:  http://www.fullers.co.uk/brewery/history-and-heritage
After we had donned our hi vis jackets, the tour began. It was both informative and entertaining with some good stories being told as we went along, whether they were all true is another matter, but, hey, who cares? It was a mixed crowd of young and old, with a few locals, and some from further afield, plenty of photos were taken and questions asked. One of the highlights for me was the cold hop store, what a wonderful aroma greeted us when we entered, I could have stayed longer. 45 enjoyable minutes had passed when the magic words “who wants a drink?” were uttered by our guide (by now you will have realised that I have forgotten his name) – unsurprisingly, the answer was a resounding yes. 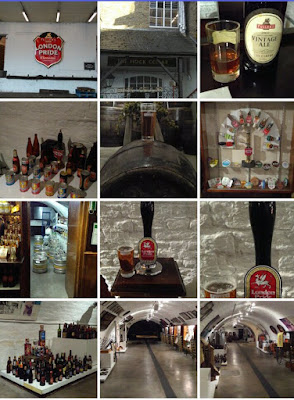 The brewery bar is in the Hock Cellar, which contains plenty of beer memorabilia and could easily be described as a museum, however, despite this, it was to the bar where we all congregated.
At last I got to try their new keg IPA,  which, at 5.3% doesn't smack you in the chops, but, a tidy bitter finish, perhaps a bit more of the citrus fruit flavours might have come through had it not been quite so cold. I also had a London Pride in tip top condition (still no Chiswick), so very quaffable (Michelle enjoyed her first Pride). There were a few amusing moments in the cellar, especially when a couple of the party asked for cider or Sierra Nevada. Lastly, and this was an unexpected treat, we shared a 2007 Vintage Ale, not only do I not have one of these in the cellar, I had not tried it previously either. It was simply exquisite, boozy liquid fruit cake. And, there ended the tour, apart from a brief visit to on site shop where I expected to be tempted by all of the Vintage Ales, surprisingly this wasn’t the case.


Last up was a visit to the York Brewery Tap, only a few minutes away from York train station, and 2 minutes walk from the hotel where we were staying (although we took the scenic route via the city walls). The outside of the brewery/tap room looks like a pub and as you get closer you get the unmistakable whiff of beer being brewed. Once inside it is a short walk up some stairs, behind glass you can see some of the brewery in operation, then you enter the tap room. Very unlike any other tap room I have been to, it is a cross between a social club and your favourite local boozer.
Naturally, their own beers dominate the choices (as it should be) with a variety of cask offerings, plus a couple of keg beers too. Made up of three rooms with a pool table/shop at the back, a middle room with an eclectic mix of furniture and the bar area with stools and barrels – this is where we perched, I like to be near the beer! 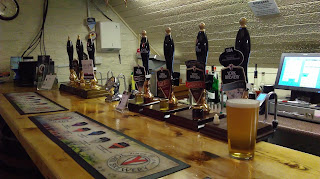 I sampled a few of the cask offerings, the highlight being a fruit wheat beer – Black & Weisse 4.8%, very light and refreshing. Both of the keg offerings were very good - Legion IX, very drinkable at 6.5%, a nice take on a US IPA, but the absolute standout was the Imperium, a 7.5% stout that provided hints of booziness, with a sweet start and a dry finish, brilliant.
The atmosphere in the bar was very friendly and welcoming, also, the wifi worked brilliantly, which meant I caught some of the Liverpool Europa League tie (bonus!).
For more information about the brewery and tap room: http://www.york-brewery.co.uk/
York has some lovely historical places of interest to visit such as the National Railway Museum and York Minster as well as some nice places to enjoy some very good beers (York Tap and House of Trembling Madness spring to mind).