I've drunk a lot of beer, I've been lucky enough to drink some really good beers, and, been to new places to drink them, both here in the UK and further afield. So, here goes.......

Best UK Keg Beer
The Kernel 'IPA Ekuanot Vic Secret'. This beer has stuck in my mind since I had it at the Craft Beer Co in Clerkenwell with co host Steve, and fellow podcasters Andrew and Luke from Rhythm & Brews. It was simply brilliant (like so many of the Kernel beers), although not strictly sessionable, more than one pint was consumed that night!

Best UK Bottled Beer
Time & Tide / Weird Beard 'Call Your Friends'. Had this on the show and both of us were blown away by it. Black IPAs can be so good, when done right, and, some can be woeful, this falls into the former category - bloody delicious. Well balanced between the flavours of the roasted malts and the hops, very drinkable and belied it's 9.7%.

Best UK Canned Beer
Magic Rock / Thornbridge ‘Exaltation’. Tried it at the Bath Hotel in Sheffield as part of the Crimbo Crawl, absolutely delicious - fruity, bitter and refreshing - pretty much everything I love in a beer and everything I expect from these two amazing breweries.

Best UK Cask Beer
Thornbridge Jaipur. Whenever and wherever I see this beer on cask I buy it (The Sheffield Tap in early December can definitely testify to this as can my bank account!). I even bought it, in a bar, in Amsterdam on gravity, at a whopping €8! 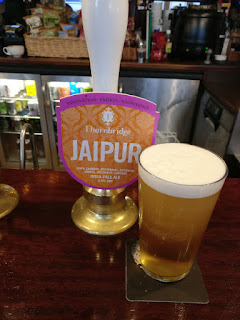 Best UK Brewery
Thornbridge. Surprised? Probably not I'm guessing. As well as everything else I have already said about Thornbridge beers, the online shop is pretty damn good.
Honourable mentions to Adnams and Magic Rock, who never fail to deliver / impress.

Best Overseas Draught
Dragoon Brewing 'IPA' - I had this on tap, in a bar, in a shopping mall (shopping centre to you and I) in Phoenix. If only all such places had a bar called the Yard House with around 100 taps to choose from. The Dragoon was a delicious straight down the line piney bitter West Coast IPA. 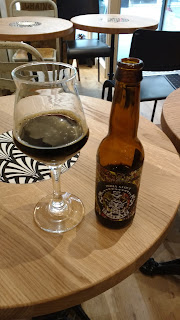 Best Overseas Bottle/Can
La Debauche 'Black Ale India Stout', had this in Beerz in Cherbourg with Michelle, a lovely little bottle shop found entirely by accident, this beer was simply fantastic, such an easy drinking stout, but, still complex in its make up, if you see it, try it.

Best Overseas Brewery
Stone - San Diego & Berlin - Love being able to get Stone beers over here from Berlin, but, when I was in Phoenix I was lucky to find a few Stone beers on tap, including the Tangerine Express which I really enjoyed.

Best Pub/Bar
The Victoria Inn - My preferred option in Colchester, a proper pub is a very apt description and anyone who has listened to the Sparklers episode of Hopinions will now know just how seriously they take their beer dispense.
The Ale House - My preferred option in Chelmsford (and home of the UKs longest running Bottle Share), always a great choice available - cask, keg, bottle and can,
Sheffield Tap - Been there three times, a Friday night, a Saturday night and Sunday lunchtime, in less than 48 hours (Crimbo Crawl in Sheffield was such a good weekend), did I mention they sell Jaipur on cask?!?!? 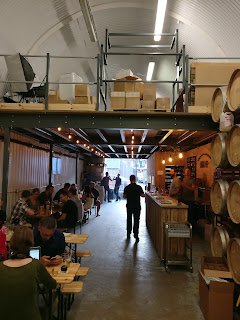 Best Taproom
BBNO revamped taproom - Paid them a visit with Michelle back in August. A very welcoming space, good selection of their beers available and barrels, what more do you need?

Supermarket of the Year
M&S – Choice & Accessibility, they provide me with the bulk of the train beers I consume, however, their stock rotation at times leaves a bit to be desired, I now always check the BBE date before I purchase, especially on the hoppy numbers!

Train Beer of the Year
Four Pure Session IPA, I just find this beer super consistent and easy to drink on the go, and, available in M&S.

Independent Retailer of the Year
Liquorice - Ever expanding range of craft beers, 2 mins walk from a mainline station I go through every day so easy to get off, stock up and get back on the next slow running train and now the Hopinions main studio of choice (for which, we are eternally grateful).

Online Retailer of the Year
Ales by Mail - I primarily use ABM for the in house work beer tastings and they never let me down.

Best Branding
Fullers & Friends - I absolutely loved the beers, and, the branding was clever yet simple. Each collaboration bottle was different but, at the same time had a uniformity about them.

Beer Festival of the Year
Manchester Beer & Cider Festival, way back in January, Steve and I paid this festival a visit and we were very impressed with the venue (Manchester Central), the choice of beers and last but not least the choice of dispense, who could forget having Track Sonoma on cask and keg, wonderful. 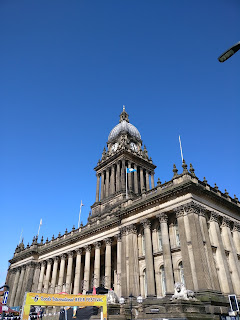 Leeds International at the Town Hall in Sep, which as you can see is held in a lovely old building (the Town Hall) and they also arrange for the sun to shine, that's what you call organisation. Great selection of beers/breweries and I could choose what size measures I wanted and simply paid for what I consumed, not sure it's a concept that will catch on....???? 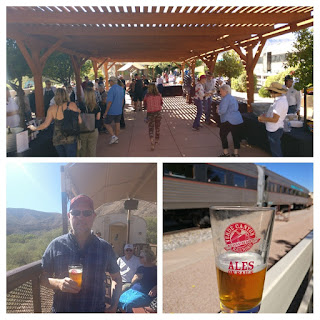 Verde Canyon Railroad in Arizona holds a beer festival during the course of October on certain days before the train ride heads off on its out & back journey (a fabulous experience), luckily for us (yes, of course Michael was excited too) we had booked our tickets for one of those days. A selection of local Arizona beers in cans and bottles available, both before and during the excursion, best train journey I've experienced for quite some time!

Simon Johnson Award for Best Beer Twitterer
Sparkyrite (2016 winner) and Steve @ BeerNouveau - Both of these guys make me smile, and, luckily enough for me I got to meet both of them this year.

Best Beer Blog
Mark Johnson (Beer Compurgation, also a 2016 winner), with a shoutout to Myles Lambert & Pete McKerry. These are the blogs that I read as soon as I can, well done chaps, keep it up in 2018 please,
Plenty of other blogs out there that I enjoy, these are listed on my own homepage.

Beery Podcast of the Year
Steve & Roland’s Beer Podcast and the Irish Beer Snobs are joint winners of my beery podcast award(It’s all about the banter on both of these podcasts). Steve & Roland and sometimes Gary, review the weekly BeerBods offering and although I am no longer a subscriber I still enjoy listening to these guys. The Irish Beer Snobs might well have been the outright winners if only they'd recorded and released a few more shows during the course of the year (I know Wayne was studying, only thinking about himself and his career, all a bit selfish really!!). Honourable mentions to NE Sippin Forecast, Beernomicon, Rhythm & Brews and Men Beerhaving Badly, so many beery podcasts, so little time!

And, there we have it, that's my look back at 12 months in beer, I'm sure I've forgotten something/someone/a particular beer or festival so apologies in advance as they say.