The Globe, Moorgate (My work local) 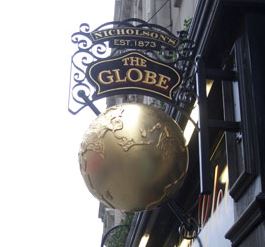 ﻿When someone says "The Globe" what do you think of? Shakespeare's Globe perhaps? The world? A spherical object? Or, does it conjure up a picture of a pub? Unsurprisingly perhaps, it is the latter for me. The Globe as a name for a pub is not England's most popular, that particular honour belongs to The Red Lion, with around 600 pubs bearing that name, although, there are over 100 pubs in England bearing the name. However, the one I want to introduce to you is the closest pub to where I work in The City of London. It occupies a prominent position at the junction of London Wall (which runs along the line of a Roman wall) and Moorgate, and it is situated in the Coleman Street Ward (The City of London is made up of 25 Wards, in fact, I might try looking for a decent pub in each of the wards......).
Historical Fact: In the reign of Charles I, there were eight Globe pubs in London, and by the middle of the 19th Century there were 31, although curiously I cannot seem to find out how many there are now. And another fact for you - next door is Fox's wine bar, previously an umbrella shop, worthy of note as it is the only place in The City of London with neon signage, not everyone knows that! 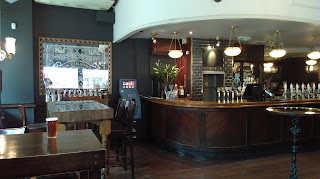 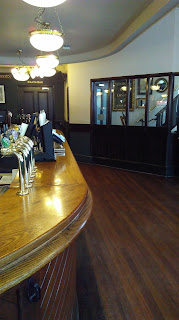 Part of the Nicholson's chain, it is a large pub with an upstairs dining area and, unusually it is twinned with another bar, the Keats at The Globe, with just an internal door separating the two. This is a cask ale pub first and foremost, it is not "craft" by any stretch of the imagination, although a few bottles of Sierra Nevada and Siren can be found tucked in the fridge, as well as the odd can of Firestone Easy IPA also Meantime Pale Ale and London Lager are on keg (whether Meantime is still considered craft by many is most definitely a debate for another day). The food available is pub fare and quite reasonably priced for The City with a few of the meals including a drink too.
The cask offerings usually include Nicholson's Pale Ale brewed exclusively for their pubs by St. Austell, and Doom, however, if this doesn't float your boat, they usually have around 6 rotating guest ales available. On my most recent visit, in addition to the beers pictured below, they also had Sharp's Atlantic, and Dark Star Hophead. 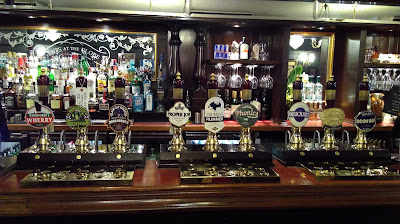 Now, it would be bad form to visit, take a few pictures and simply leave, so, I didn't.
I sampled, purely for research purposes you understand, four of the beers available on cask, and, before I go any further, let me just say that all four had been well looked after and served exactly as expected/hoped for. This for me is always a good sign and one of the reasons why I visit the Globe on a fairly regular basis (according to Untappd my last check in was my 120th at this venue).
I started with what could be described as a default beer - the Nicholson's Pale Ale, brewed by St Austell in Cornwall. Coming in at 4% abv, it is a very nice English PA, with a well balanced bitter finish, if need be, you could have lunchtime session on this one (not that I would obviously). 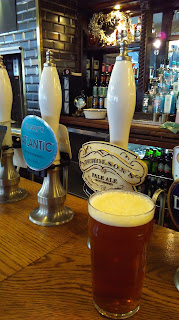 Next up was the quite wonderful Hophead from Dark Star. A 3.8% hoppy fruity low abv offering from Sussex, which I am always happy to see this on the bar in any pub I frequent. I also revisited a beer I hadn't had for a while - Proper Job from St Austell and a new beer for me, Moorhouse Black Cat Reserve.
Anyway, a little bit more about the pub itself, the main bar in The Globe has an L shaped bar offering plenty of seating round the outside, while leaving plenty of space in between and at the bar for those that are standing/ordering. It should be noted that like a lot of pubs in the square mile, Thursday and Friday evenings are busy in here, and, especially so in the summer even though a number of the punters spill outside onto the pavement and the grassy knoll (probably more of a mound, but, knoll has a certain ring about it). Keats Bar is long and narrow, again, plenty of seating, but, less space in between the tables and the bar, it can feel crowded in here sometimes. The clientele including yours truly, are generally city workers, although please don't let that put you off! There are a few tvs dotted around in both bars, and all them showing BBC News 24, goodness knows why pubs think it is a good idea to show the news all day long, personally I could do without it.
To be fair, that is probably my only gripe about my work local. It is convenient in relation to the office, it has a good choice of well kept ales (and my lager/wine drinking friends can also find plenty on offer) and the staff know how to look after and pour a decent pint.
If in the area, I would recommend a visit, oh, and, don't forget to invite me along too!