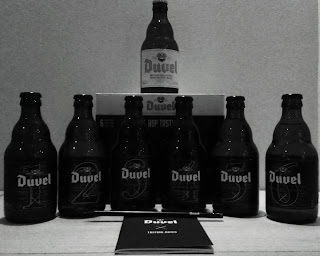 Monday 25th April was meant to be a dry day. Well, that was the plan. Then I received an invite to attend a tasting of all 6 of the Duvel Triple Hop Series in the West End. I said yes.
So, off into the cold wind and rain I went (the things i do eh....?) heading in the direction of Oxford Circus. However, rather than head straight to the venue, I met with a couple of friends beforehand - Steve, one half of the much
loved beer podcast The Beer O'clock Show and Matt, otherwise known as the Half Pint Gent, check them both out on Twitter. Having had a half of well kept Truman's Zephyr at The Windmill we made our way, in the sunshine (British spring time?!?!) to The Burlington Arms.
We were greeted with pens, paper, glasses and most importantly, beer. First up was Duvel, a true classic in my opinion, but, probably overlooked as we are so used to seeing it in bars and supermarkets, this is a mistake and I am as guilty as anyone on this score. Duvel is brewed using two Hop varieties, Saaz-Saaz and Styrian Golding, together they produce an 8.5% abv golden refreshing beer that drinks like a sub 5% abv, simply wonderful.
So, what is Duvel Tripel Hop you might well ask, simple in principle, they had a third hop into the mix. This practice started a few years ago and they have reached the stage where there are now 6 iterations of the beer. Our mission was to taste, and decide which were our three favourites, voting forms were also provided. This process would be replicated around the world with the winning beer becoming a staple offering in their portfolio from 2017.
A few of us took an orderly approach to proceedings, deciding to use the bottles as our guide, handily numbered 1 to 6 (OCD 1 - 0 Chaos), reflecting the order the beers were originally released.
First up - Amarillo. I have to be honest here, this one might have  suffered because it came straight after the original, saying that, a few of us were of the same opinion - didn't really work. Quite a sweet start, with a dry finish, but, not a whole lot going on in between, the aroma felt slightly out of place too. Using my Untappd scoring system, this was a 2.75/5. 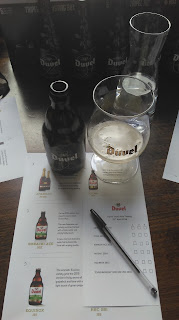 However, the next beer utilised one of my favourite hops - Citra, and, boy, could you get that on the nose straight away. The taste didn't disappoint either, dry fruity citrus all in a nice Belgian golden ale. Very enjoyable, score 3.75/5.
Number 3 was the Sorachi Ace, which is a Hop from Japan that definitely divides people in the beer world, let's call it the Marmite of hops. I neither love or loathe it myself, as it turns out this is the one I had tried previously, twice, giving it 3.5/5 on Untappd, and after sampling again saw no reason to change that score. This was the driest of the beers by far, literally sucking the moisture from my mouth, which meant I drank a bit more (cunning plan there Duvel) and I felt the Sorachi Ace worked well with the base beer.
Hop number 4 was the Mosaic, which like the Citra provides plenty of tropical fruit aromas and flavours, but, also provides more bitterness. This combination worked big time for me, a 4/5, which incidentally is the same score I gave for the original beer back at the start of the tasting.
Into the home straight with 5th in the series - Equinox, a Hop I am not immediately familiar with, but, definitely added fruity notes to the aroma, but, less so on the palate. Not so dry as the four that preceded it, but, drinkable none the less, a 3.5/5. 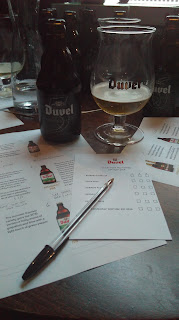 Last up was the Experimental Hop 291, catchy eh? So new, it is as yet unnamed. This one, a bit like the Amarillo didn't hit the mark for me, I found it rather sweet, however, with a little persistence it did grow on me, getting a respectable 3.25/5.
Before I voted, and just to make sure my scoring and comments were correct, I tried them all again, yes, I am that dedicated!
Mosaic won for me with Citra a very strong second. Third place was a tie between the Sorachi Ace and Equinox. However, if I had to choose just one beer from the Duvel range to have on a regular basis, it would be the original.

A very interesting and enjoyable evening was had by all who I spoke to.
This event was hosted by R&R Teamwork Drink & Food PR, thanks to all involved for setting this up and looking after us.
PS - Loved the scotch eggs, they were delicious.
PPS - Big thanks to Steve for getting me on the guest list, much appreciated. See what Steve thought about the beers - https://t.co/tyGBCmpGQP
Posted by mjpo007 at 00:57