Friday 26th February started out well, a lie in (as I had booked the day off work), which is always welcome on a work day.
Then I clocked up a few miles on the road on my bike, showered, changed, grabbed some water, train beers, rucksack, train ticket and most importantly my ticket for Craft Beer Rising. This was the 4th year I believe and set to be the biggest yet, with over 100 breweries being represented. The festival was being held in the iconic Truman Brewery building on Brick Lane, it was an event I had been looking forward to attending for quite some time. Train departed Colchester on time and shockingly arrived in Liverpool Street as scheduled, a very relaxed 49 min journey (if only my daily commute could be like this, minus the train beers though!).
Grabbed a sandwich at Liverpool Street while waiting for one my brothers to arrive, he was travelling down from Milton Keynes and a catch up was long overdue, so, thought I would combine with a few beers before CBR16 (hey, it was a good plan....). First stop was The Crown and Shuttle, a pub that had been previously boarded up for a number of years and before that might well have been a strip pub, with the pool table being the stage (naturally if asked I never visited it's previous incarnation, a story I am sticking to). Now it is all Shoreditch/craft beer hipster venue, with the walls and floors stripped back leaving the original building exposed, and, no doubt all the better for it. Had a couple of beers here, including the Session IPA from Hackney Brewery, a very sensible 4.1% abv citrusy number, with a bitter finish, Brian was suitably impressed, which was a good thing as I had taken control of the ordering, in his own best interests!
It should also be noted that if you are a fan of the Meantime Brewery Fresh lager, the Crown and Shuttle has a couple of tanks full of their beer. Must be said they do look very good. 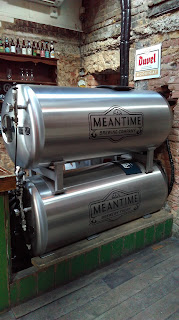 This was my first time visiting this venue, and while I enjoyed my afternoon visit, you can sense that after 5 on a Friday it will be very busy, being so close as it is to the City and en route to the East End.
Next up a quick pit stop at Brewdog in Shoreditch, close to Brick Lane, where we met up with Clayton, so, now at least one of us had a beard before entering full on hipster territory.

Upon arrival at The Old Truman Brewery, we were presented with a queue, but, this moved along without too much fuss. Craft Master One (how "crafty" does that sound? lol) glass and programme collected, away we went up the stairs to the main hall, a pretty sizeable affair which allowed the organisers to put all the beer in one place and double the capacity. Another plus was a cloakroom, I do wish more festivals (traditional & craft) had this option.
The layout was very simple - 3 aisles of beer, despite this we got about 20 feet when we saw Beavertown and the souped up version of Neck Oil - Double Chin, an Imperial IPA weighing in at 8.5% abv and brewed to celebrate their 4th birthday. Very enjoyable it was too, you knew it was bigger than the Neck Oil, but, not so much that the 8.5% screamed at you.
Walking and browsing appeared to not be high up on the list of priorities as we found that we had only got as far as Brew By Numbers, and they had a beer I had marked down as "must try", the 55|01 Double IPA - Citra Mosaic Simcoe. Another imperial IPA, it belied its 9.2% abv. It was ever so drinkable, bags of fruity citrus bitterness, it did not last long. We then bumped into Matt (or, Half Pint Gent as some of you might know him) who had already been to the trade session, and with camera in hand was able to take a picture of Clayton drinking his 55|01 Double IPA, the beer which clocked up his Elite badge on Untappd (2,500 unique check ins), well done that man!
Next up was Adnams Triple Knot, a beer I had bought back at the start of the year in bottle and sampled while it was still fresh, the overriding taste and aroma was one of pear drops. So I thought I would give this 10% abv  Belgian tripel inspired offering another go, but, on cask. It was delicious, and again, it reminded me of all of the pear drops (not my favourite sweets as a kid - all about the cola cubes), but, was smooth enough to really enjoy and provided a nice counterpoint to the hoppy citrus beers I had sampled already. Around this point, my brother decided enough was enough and now was a sensible time to head off back to Milton Keynes.
Matt then insisted that we pay a visit to Tempest Brewing Co, these guys were very helpful and friendly and so it came to pass that I tried the Longer White Cloud, a 10.2% abv pale beer, with the style purposely not specified by the brewery. Instead they want us, the drinker to simply appreciate the freshness of the new season NZ hops. Verdict - simply a wonderful beer that is easy to drink, in fact too easy, this is where I have pinpointed the moment that I started on the inevitable roll downhill. 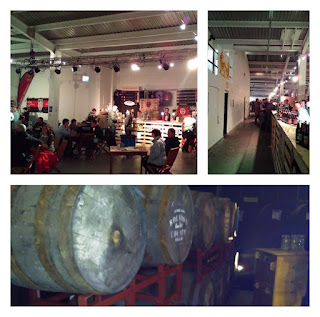 However, there was still time for more tastings! I had entered a draw to gain entry to the Goose Island Barrel Aged tutored tasting session, so, having collected our tickets Clayton and I made our way downstairs to sample some beers from Hertog Jan and Goose Island culminating in the Bourbon County Brand Stout. The beers were all very tasty, and, a few styles were covered off including a Dubbel, a Tripel and a Belgian Pale Ale, as well as the aforementioned stout.
I enjoyed the tastings and I know everyone else did, but, I am afraid I cannot be anymore descriptive about the beers as I had stopped making notes at this point. I was fairly much at the bottom of the hill. It was time to leave. Despite this not being anything like my first craft beer festival, I had been like the proverbial kid in the sweet shop, I will endeavour not to repeat this mistake again! And, I will certainly be looking forward to CBR17, as I thought the set up was absolutely fantastic, well done to all concerned.

On Saturday, the plan was for Michelle and I to pay a visit to the Chappel Winter Beer Festival, a lovely venue at the East Anglian Railway Museum between Colchester in Essex and Sudbury in Suffolk. Train tickets had been purchased, we made our way to Marks Tey train station to pick up branch line to Chappel & Wakes Colne, however, the once an hour service at 12.21 was not going anywhere, Greater Anglia had lost the Guard. No guard, no train......almost two beer festivals, but, no t shirt.

Till next time folks, happy drinking.