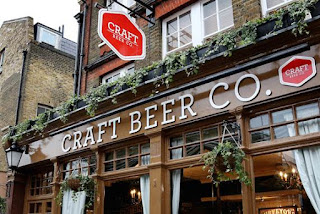 I like to mix up the events I run at work, helps to keep things fresh, also challenges me to come up with new ideas. With that in mind, I enquired with the nice people at The Craft Beer Co in Islington if they offered tutored beer tastings, they answered in the affirmative. A few emails later, and the booking was confirmed, a silver tasting (yes, you've guessed it - they do a bronze and a gold one too) consisting of 6 beers on Thursday 11th Feb at 6.30pm for a max of 25 people. Within a couple of weeks, all 25 places were snapped up by my colleagues, monies received and paid into Finance (these events do not organise themselves you know).
It is probably a 30 min trip door to door from the office to the pub, hence the 6.30pm start, however, as always happens with the external events we started closer to 7pm (which meant an extra beer at the bar for me, oh well.....) to allow for as many of the group to be there for the start of proceedings. 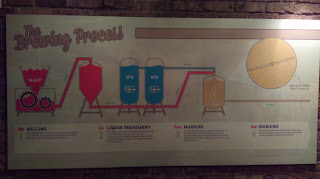 Now, I have been to Islington Craft Beer Co twice previously and had noticed a rather nice room at the back with the brewing process pictured on the walls, this was to be our area for the evening. The two previous visits had both been enjoyable and noteworthy for me - 1000th unique check in on Untappd and my first Cannonball/Unhuman Cannonball experience. 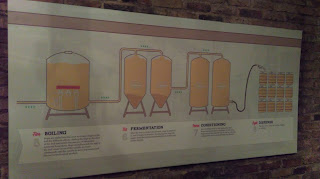 Thanks to Mark, our host for the evening, my third experience was no less enjoyable/noteworthy. We kicked off with Tzara (4.8%), from Thornbridge, their take on the classic German beer, Kolsch, which is traditionally brewed and served in Cologne. I have a soft spot for this style of beer having visited Cologne a few times over the last 12 years as one of my brothers lives there, and this beer did a very good job of helping me to imagine being in the old town in sight of the cathedral and the Rhine drinking multiple 200ml servings cold and fresh (which the bar staff will continually serve to you unless you put a coaster over your glass, I think I might have forgotten that bit a couple of times!).
Next up was a pale ale from Kent Brewery (Clerkenwell Pale @ 3.8%), this cask offering is in effect the house beer, and it gives you everything you would expect from a sessionable English pale ale. However, not only did we get to taste the beer and opine, we also had the brewer, Richard Barclay in the house. Richard very kindly gave up some of his free time to explain the brewing process to us and was on hand to answer any questions afterwards too, very much appreciated.
Beer number three saw us up the abv to 5.5% and a change in colour and flavour profile - Maduro Brown Ale from Cigar City Brewing. I have had this before, and, was impressed with it and this time round was no different, a brown ale with a pretty complex flavour profile but very drinkable. I have to admit I often have a love/hate relationship with brown beer, especially traditional British versions which for me can too often be "twiggy, grassy, woody", whereas the Americans seem more than happy to create a brown beer that doesn't merely taste "brown".
Beer number 4 was a beer very familiar to me - Salty Kiss (4.1%) from Magic Rock in Huddersfield. The style is a Gose, this is a tart yet refreshing style of beer, originally from Leipzig that uses wheat as well as all the usual beer ingredients. A lovely beer in its own right, it is also a fabulous palate cleanser, which would set us up for the final two beers.
The penultimate beer was Molotov Lite by Evil Twin Brewing an 8.5% Double IPA. I found this to be a really well balanced beer, plenty of tropical fruit notes, with a lovely bitterness that merely had you reaching for the glass time and again. At 8.5%, a dangerously sessionable beer, please take due care and attention with this one!
Last, but, very definitely not least was Aphotic Baltic Porter (9.3%) from High Water Brewing. This beer has benefitted from barrel ageing and blending, and the end result is a smooth dark chocolate of a beer, definitely an end of evening type of beer, one to savour (for the record, i didn't, just too damn tasty).
And, that as they say was that. Feedback from my colleagues has been positive, so, once again thanks to Mark at Craft Beer Co Islington and to Richard Barclay from Kent Brewery.
Posted by mjpo007 at 08:53