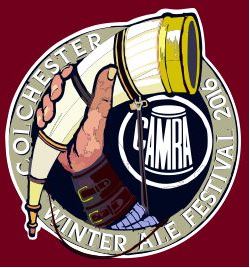 The 9th Colchester Winter Beer & Cider Festival is over for another year.
I am pretty certain I have been to the last 8, it is therefore very possible that I missed the inaugural one, sorry about that Colchester Camra (although, on the upside one less tankard to store).
The festival is usually held over 4 days, finishing as ever on a Saturday night, although there is also a Camra members preview evening, which I couldn't get to this year. The venue is the Colchester Arts Centre, centrally located and easily accessible by most, if not all forms of transport.
The Arts Centre is an old church (a very old church in fact, that first appears in local records as far back as 1206), St Mary-at-the-Walls, with quite a substantial graveyard outside the main building, where the summer festival spills over. Which, when I see everyone drinking outside always reminds me of a scene from Steptoe and Son, where Steptoe senior is heard saying "first time I have ever had a drink on him" while his beer rests on the deceased's coffin! 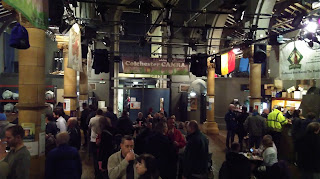 As ever, these events are best enjoyed with friends, and, so, on a wet and windy Wednesday evening a few of us made our way from London, Chelmsford and Harwich to sample some cask ale.
A seamless process sees us get our 1/2 pint tankards, which I do like, if only I could find a way to store them efficiently, programme, and our token card (this means the rest of the evening is cashless and any leftover 10p tokens are donated to a local charity), which leaves us only one more thing to obtain - BEER! As you can see from some of the pictures, there were a few casks available to us........ 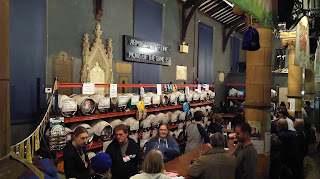 Now, I had already done a little bit of preparation, having utilised the online beer list, so I headed straight to one of the bars to find Oakham Ales "Affair at Styles" a 3.8% abv described as a limited edition, pale golden beer bursting with citrus and tropical fruit flavours. I simply described it as dry, bitter, refreshing and hoppy. Off to a good start with a beer from a brewery I have a lot of respect for.
Next up, I wanted to try a beer from local home brewer turned small batch brewery, Oli Watts(https://twitter.com/wattsbrew). However, the 1st of his two casks had already sold out, damn! Well done Oli as I hear that the second cask also sold out pretty rapidly later in the week also. That is the downside of doing your homework before a beer festival, inevitably not all beers listed will be available when you are there, so, in order to put this disappointment behind me, I looked for one of the two new Harwich Town Brewery beers. Success - Hamlet was on (which either reminds you of a play by The Bard himself, or a brand of cigar, if neither, perhaps you are too young to be drinking or reading this blog!), a copper brown bitter coming in at 4% abv, I noted this as a very dry English bitter, not twiggy or too malty. It was well balanced and along with the offering I tried from Oakham, was in my top 3 beers of the night.﻿ 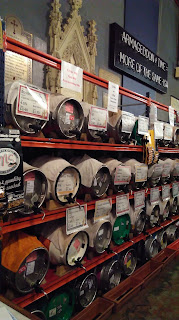 Beer of the night for me was a new one from a brewery I do not believe I have come across before, but, will keep an eye out for them in the future - Papa Steve 2015 from Bexar County Brewery (http://bexarcountybrewery.com/). An American Imperial Stout. Extremely limited edition beer, packed with flavours of burnt toast, dark chocolate and hints of toffee with an impeccably smooth finish, weighing in at 9% abv, my own notes were somewhat less eloquent - lovely dry stout, very easy and drinkable. Subsequent to deciding that this was my beer of the night I did a little research and found out that there was a very personal and poignant story behind the creation of this wonderful brew (http://bexarcountybrewery.com/2015/10/24/the-story-behind-papa-steve/). If you see this beer, give it a go, you won't be disappointed, but, take care, as it hides the 9% abv rather well!

Naturally, I tried a few more beers, plus a couple of Belgian bottles were shared, and, as ever I had an excellent evening that went all too quickly. Thanks to all the volunteers who help make my local winter beer festival what it is and who also provide tasters, advice and opinions in equal measure!
Roll on the summer festival on the 1st June 2016.