Tryanuary - What i will be doing? 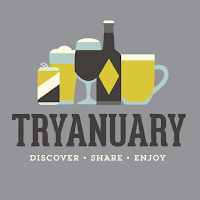 Happy New Year to you all!
Tryanuary (not to be confused with the industry lead Try January) - what does that word conjure up for you? Initially, and perhaps unusually, I was a little undecided as to what route to take in January.
I knew I wanted to reduce my overall intake (for many reasons - health & wealth being two of them) and have a bit of a reset - 2nd half of December was busy with the Beer OClock Show Crimbo Crawl, then straight into the 12 Beer of Xmas, which overlapped with Christmas Day and New Years Eve as well as catching up with friends and colleagues - phew, glad that is all over!
However, I also knew I had no real desire to abstain for 31 days, so, what to do?
I have decided to embrace the community lead Tryanuary http://www.tryanuary.co.uk/ who offer an alternative to Dry January:
Make it your mission to seek out new INDEPENDENT breweries, beers, bars and bottle shops, and share your discoveries with people throughout January. 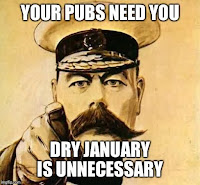 Now, that doesn't mean I won't be having dry days, as I always aim to do that, it definitely makes the morning run a lot less painful the next day! It also doesn't mean that I will hit every "objective" stated above, but, I always like to have a goal, so, I am using the statement more as a guide than a commandment. With that in mind I visited two local pubs on Sat, that I had neglected in December, in large part due to illness but, also to the aforementioned activities, most of which occurred outside my home town, or, at home. Both pubs had regulars in and it felt nice to be back (The Victoria Inn and The Bricklayers) supping cask ale on the whole, which my girlfriend has now taken a liking to also. However, once I got home I considered how much I had drank and realised that there was no good reason why I had pints in one pub and halves in the other, therefore I have decided that although I want to do my bit for Tryanuary, I also want to do my bit for my health and wealth I am going to endeavour to reduce the volume - wish me luck as NOT ordering pints does not come natural to me in a pub environment, I am sure there will be slips along the way, but, if I achieve any level of success then perhaps it could pave a way for future me, who knows? But, as I said earlier, I do like goals.

I look forward to hearing how others get on with their Tryanuary experiences, should be fun!
Good luck to all those taking part and may the force be with you.