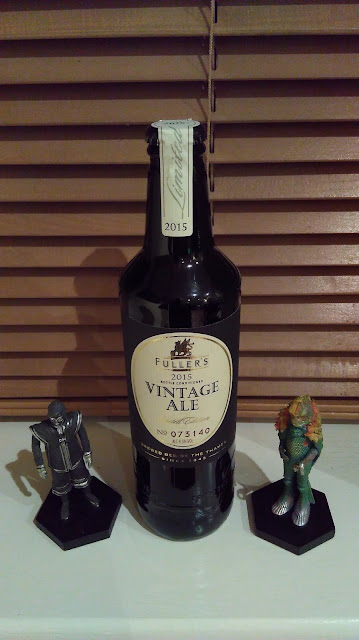 This iteration of the Vintage Ale series has been produced using Maris Otter malt in celebration of  it's 50 years in production with Challenger and Golding hops helping to ensure that this is an all British beer. Since 1997, Fullers have been brewing up their vintage ales, however, the oldest version I have tried is from 1999, and, I loved that one, felt like I was drinking a port or dessert wine. The freshest version I have sampled was at GBBF a couple of years ago, and tasted wonderful, albeit less complex than the matured bottles. I am sure by now, everyone knows that the older/rarer the year, the more expensive it is, just take a look at the website if you don't believe me.

Right, well the 2015 bottle is open, pours a slightly lighter colour than i expected, very fizzy initially. First few sips, didn't get much, but, once i settled in i started to get some of those malty fruity notes i have experienced before.
The more you drink this, the more you appreciate the complexity, i am now getting a few woody tones and the bitter finish is rather pleasing.
This is really rather nice, the ones in the "cellar" will be well received (by me, for me) further down the line.


Both of these characters have only appeared in one Doctor Who story each.
On the left we have a robot from Robots of Death, featuring Tom Baker, the 4th and longest serving actor to play the iconic role. Robots of Death is a classic adventure - "a base (ship) under siege" from within. On the right, a Terileptil from The Visitation, a 5th Doctor adventure, which incidentally explained how The Great Fire of London really started - it was the aliens.