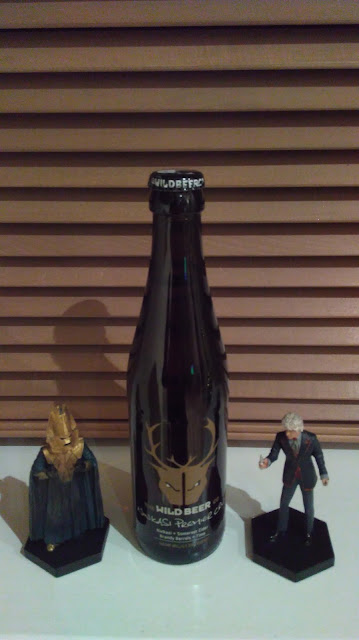 Wild Beer Co presents Ninkasi Premier Cru a 10% barrel aged beer, that utilised three different barrels during the maturation process - cider brandy, whisky and barley wine. That's quite a combination and one that quite frankly makes me a little bit nervous - will it still taste of beer?

Initial thoughts - cider with a hint of Belgian funk, is that good or bad?
Nice carbonation, good mouthfeel, bit cloudy, but, you know what, i think i quite like this.
Bit of an acidic afterburn, but not too overpowering.
(Girlfriend not fussed about this one - #allforme)
Today's Doctor Who Figurines features Jon Pertwee as the third incarnation of our beloved hero, and Omega, a renegade Time Lord who existed only in a world he created, a world of antimatter at the other end of a black hole draining all the power from our universe. The story in question - The Three Doctors featured William Hartnell and Patrick Troughton as all three of the Doctors were needed to defeat Omega. The third Doctor was then released from his exile on earth and free to roam time and space. This was billed as a 10th Anniversary story, however, it was much closer to 9 years, but, as it was released at the start of season 10 I am guessing the term "10th anniversary" was stretched a little to kick off the season in style, which they most certainly did, one of my favourite stories from what we now call the classic series.