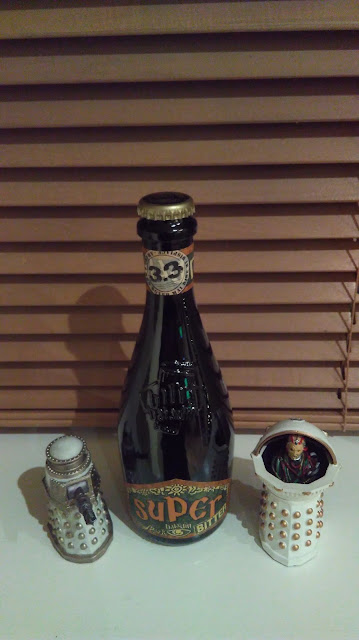 Day three brings us a Belgian Pale Ale from Italy, weighing in at 8%, produced by Birra Baladin in Piozzo - simply titled Super Bitter.

The aroma off this beer smacks of IPA, I have no idea if it that is what it is supposed to be, but, bloody lovely.

The Special Weapons Dalek and this version of Davros (creator of the Daleks), masquerading as the Emperor Dalek, appeared in Rememberance of the Daleks with the 7th Doctor being played by Sylvester McCoy, it was released in Oct 1988.
This is probably my favourite 7th Doctor adventure, set in 1963 in the East End of London, featuring warring Daleks who have split into factions and the first time that a Dalek levitated up some stairs! Now, that was a proper cliffhanger at the end of episode 1!
Posted by mjpo007 at 14:24