So, those two beer buddies from The Beer OClock Show, Steve and Mark decided back in the summer that the Crimbo Crawl would take place in the city of Leeds. After all, what could possibly go wrong the last Saturday before Christmas?? Well, for starters, a visit to Magic Rock on the Friday night! For those of you who know Steve, it will come as no surprise that this was his idea.
So, off to Huddersfield a few of us went.
The station is a bit of a treat in it's own right, a lovely building and two decent pubs - The Head of Steam and The Kings Head (Landlord was in very good condition in the latter). Both are worth a visit, although it has to be said, they were the starter and dessert, Magic Rock was the main course, and, what a main course it was! Tap Rooms are definitely on trend these days and the guys have designed and delivered a wonderful space to enjoy their great range of beers. All I can say is go and enjoy the magic at the source. Beery highlight - Cannonball of course.
Big shout out to the guys for taking some time out to show us round the brewery, very kind of them, and appreciated by one and all. 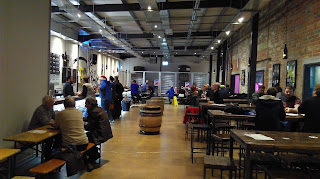 Saturday kicked off with a couple of visits to the hotel breakfast buffet before heading off to Northern Monk, a few minutes outside the centre of the city centre. When you enter what used to be a flax store in days gone by, you are immediately hit by the smell of beer being produced as the brewery is on the ground floor. Up some stairs and you will find the tap room,  where a good selection of their own beers are readily available. I tried 3 of them -  Purl, Faith and Spicy Mocha Porter, with Faith being the best of trio for me, nice refreshing easy drinker of a pale ale. 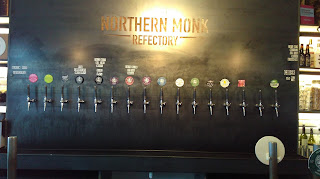 Next stop was the Black Swan, apparently in it's previous life it didn't have a great reputation, however, that seems to be all behind them. Again, another beautiful building inside and out, plenty of space and rumour has it - the best pizzas in Leeds.
Decent beer list - cask and keg as well as a very good bottled selection.
I had a sour from Wild Beer - Hibernating Lemons, refreshed the palate, I followed that with a Founders Porter, which was simply lush. 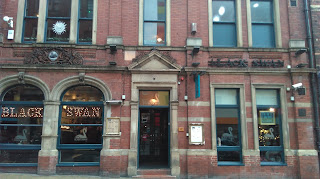 Third venue was the Little Leeds Beer Shop, although due to it's size, we had to split up into groups, nevertheless, this was my top venue of the day. It's light and bright, great beer selection, helpful friendly staff, and, they had Radio 5 Live on too, what more can you ask for?? Also, it's housed in the Corn Exchange, which is simply a lovely building, especially inside.
Only had the one beer, so, I made it a good one - an 8% offering from Cloudwater, their Winter IPA, actually this might have been my beer of the day too. Hoppy, fresh, doesn't feel too boozy, in fact quite subtle, a very well made beer. 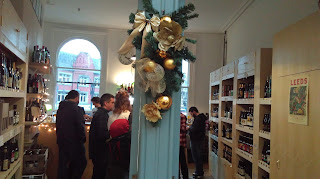 Despite the rain, spirits were high as we headed in the direct of The North Bar, a long narrow and busy venue. Again, as you would expect from a bar on the Crimbo Crawl list, a good selection of beers presented themselves upon getting to the bar. I decided to have a couple of fairly average cask beers, they served their purpose as the abv wasn't too high and kept me away from the Cannonball (unlike some of my beery friends). 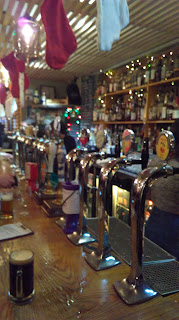 Before hitting the 5th and final venue, three of us took a deep fried chicken break, we ate all the chicken available. Life was good.
Back to the crawl - ShuffleDog (they have 3 shuffleboard tables downstairs), the main Brewdog bar in Leeds. This is where we all came back together, good beery chat with access to wide range of beers was had by all. I dived in with an Albino Squid Assassin by Brewdog, a 7.4% red rye ale. Next was B Side: Milk Stout Nitro, a 4.7% sweet milk stout, nice palate reset, last beer at ShuffleDog was Punk - what else? Enjoyed all three as they offered me what I wanted at the time of asking. 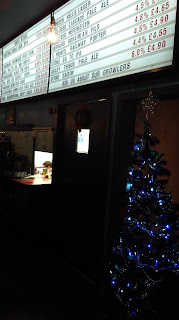 ﻿
So, this is where the official Crimbo Crawl finished, and people started drifting off - food, trains, back to hotels. A few of us however, popped into a few other establishments and I must say I wasn't disappointed with any of them.

Leeds has a lot to offer as a beery destination and I can see why a lot of people rate it so highly.

Lastly, the day was so good because of the company, catching up with friends and making new ones all with a common interest in beer, although the conversations were very diverse at times I must say!

Beer people are good people, and, I reckon for most of us - it was the "highlight of the week".

Some more photos of the weekend, courtesy of @clayfiish:
https://photos.google.com/share/AF1QipOR9wnERcipzgBLh5o4IQO7OqS3K7bdUmVJK875Jj80gAyE7ZMSjtg9ZOFdE7RR9Q?key=R1RWLWVYbTVXU3NMMmhnSmVsVVp6amRZaThCSDdR
PS - Apologies for the slightly odd formatting, not really sure why/how. I blame Windows 10.
Posted by mjpo007 at 15:05