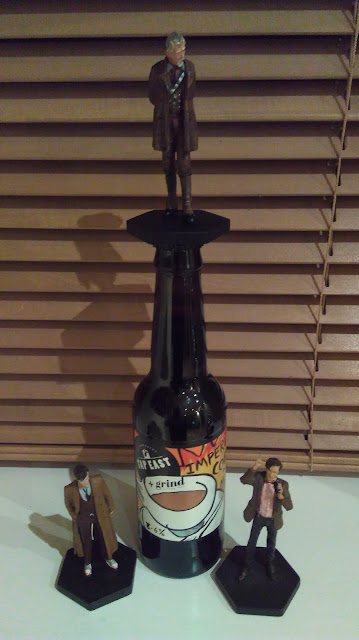 Previously tried this at the very first SXBottleShare, way back in Feb this year,
although I think I bought this bottle at the London Brewers Market in summer 2014.
It pours out rather excitedly, but calms down in the glass to leave a nice foamy head. Very black. This is dry and bitter and you can certainly get the coffee flavour and aroma from their neighbours at Grind Coffee Bar. Definitely one to sip and savour, especially as only 500 bottles were produced. One day i might like actual coffee!
Three figurines today - David Tennant and Matt Smith as Doctors 10 & 11 respectively. We also have John Hurt as the "War Doctor" - this is the incarnation of the Doctor that killed Time Lords and Daleks alike in the last great Time War. They are all brought together to defeat Daleks, Zygons, and prevent the destruction of Galifrey, home planet of the Time Lords. This was released on
the 23rd November 2013, 50 years to the day since Doctor Who first hit our screens.
It was shown in 3D at selected Odeon cinemas. I did go. I was very excited. I loved it!