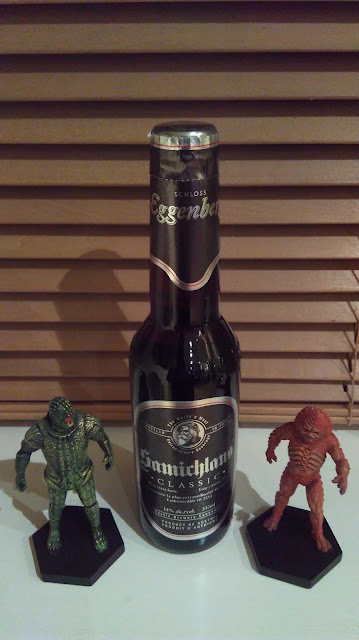 Samichlaus Classic, a 14% Doppelbock from Schloss Eggenberg, a micro brewery in Austria.
This beer is brewed once a year, on the 6th December, it then spends 10 months in the lager cellar, sorry no idea what it is actually doing in the cellar.....hiding perhaps?
My beer was bottled in 2014.

I first clocked this beer back in 1990, on a shelf in an Unwins off licence in Milton Keynes, where my parents had just taken over the running of the shop. I assumed it must be twice as bad as Special Brew (my only reference point for really strong beers at that time, and, tasted just the once) as it was almost double the abv. It should be noted that my parents never did see the customer who bought the two bottles, and, over time the beer faded from my memory.

That is, until August 2015, in Lille, and a chance visit to a wine shop near to the hotel where my girlfriend and I were staying (our first trip away, who says romance is dead?!?!). I had already added to my ever growing beer collection, so, I really didn't need any more, but, I still went in for a look and there it was - the beer I had seen so many years previously. But, should I purchase one, two, none? I was "encouraged" by Michelle to go for it, so, two were purchased, the other one is in the "cellar".

Well, it pours a lovely caramel colour, the initial carbonation dies off pretty quickly, reminds me of a barley wine first off on the nose, or, a very strong altbier. It is very sweet, and not at all boozy. Couldn't drink too many, but, i am enjoying this....wonder what my 19 year old self would have thought?

The Ice Warriors (on the left) first appeared in Nov 1967, in a story simply titled The Ice Warriors, starring the second Doctor (Patrick Troughton). They went on to make further appearances up till 1974, then they disappeared until they returned in a Matt Smith (the eleventh Doctor) story called Cold War, in 2013.

The Zygons (on the right) only appearance before the 50th Anniversary story Day of the Doctor was in 1975 - Terror of the Zygons, starring Tom Baker as the fourth Doctor. They have the ability to shape shift (take on the appearance of other life forms) which is probably one of the reasons why they were always voted the favourite one-off monster to make a return, which happily they did.