How I started up the office beer tasting club

It started with a thought, that turned into an idea.....an idea that I thought would never get approved or take root, but, I thought why not, i've got nothing to lose after all.
So, where did this thought come from you might ask, well, it came from attending the wine tasting events held in the office (the office being a financial institution in The City). These are aimed solely at staff, as a way to connect with colleagues in a more relaxed atmosphere, taste some nice wines with some very interesting facts and information being absorbed along the way. I also wanted to spread the word, the world of beer was getting bigger and better, it was time to share the love.

Why not copy the wine tasting model and apply it to beer tasting?
But, where to start?
So, I spoke to the guy who held the Sports and Social purse strings to see what could be done. He was receptive to my idea:
An in-house event, a selection of beers, a beer writer/speaker to come in, plus throw in some food.
Proposal accepted, the caveat being that all attendees had to contribute 50% of the cost, with the bank providing the other 50% (in line with how all the other clubs were run).

Now, the real work began……..
When to hold it?
Where to hold it?
How much to charge?
How many people?
What food to serve?
Who was going to be my beer expert?
Where to buy the beer?
How to pitch it to the rest of the office?
So many questions, and, initially very few answers!


Wednesday 9th March 2011 was chosen, a midweek date in between Feb half term and the Easter break, hoping to max out the numbers of attendees.
Venue choice was the easiest decision, as we are lucky to have a floor available for meetings and presentations – room booked!
Pricing was a tricky one initially, but, I did a few sums and came up with a number, which meant I came in under the usual cost charged by the wine tasting club (an important consideration for me)

The wine tastings usually attracted between 40 & 50 people, so I went for a max of 40 people as that was a number I could work with, organise, control (well, you know what bankers are like).
I had previously sampled the in house finger buffet, so, that was ordered – very little thinking on this one, plus the cost per head was reasonable, and, I like the informality of a buffet as it gets people up and moving, hopefully engaging with other people on different tables.

A beer expert was needed – where do I find one of those?? As fate would have it, I had been bought a beer related book for Christmas 2010, by Jeff Evans. I contacted Jeff, and, with very little fuss we arranged a fee, and a working programme for the evening. Best of all Jeff said he would source the beers and bring them with him – only one question left to answer, how do I sell this to my colleagues? 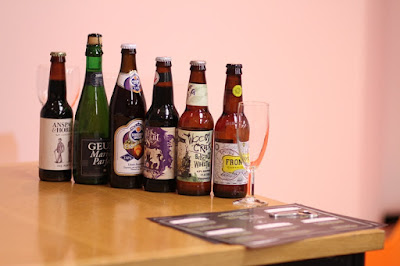 So, I started a campaign to raise awareness for the event – using word of mouth, emails, the Classifieds on the intranet plus a few posters, slowly but surely I got to the magic number - 40 people had signed up.
Monies had to be collected and paid to Finance, not as simple as it sounds due to multiple people on multiple floors with varying degrees of access, due to virtual and physical Chinese walls between different parts of the business, but, i got there in the end.

The 9th March arrived, with the event planned to kick off at 6pm, I (along with Clayton, fellow beer geek) was upstairs helping the 5th Floor set up the room, and the reception area, where attendees could mingle prior to the event formally starting. One lesson i had learnt from an external beer tasting i had gone to was that there was nothing worse than listening to someone introducing themselves, starting a talk about beer, when you have no beer in hand! This would not be happening at any event of mine (and to date that has been achieved).

Jeff and the beers arrived in good time, the room was set up, tables, snacks, water, glasses (we use straight half pint glasses, although I would love to get some better glassware) even spittoons were available if required.
The plan was for Jeff to introduce himself and guide us through 6 beers of varying styles and strengths, giving us a little bit of background on each of them. He also brought a few of his books for people to buy and was more than happy to answer questions before, during and after the event.


The beers we sampled were:
Triple from Brakspear 6.7%
Dark Lager from Budweiser Budvar 4.7%
Pilsner Urquell by Plzensky Prazdroj 4.4%
Hefe Weissbier from Weihenstephaner 5.4%
Admiral’s Ale from St Austell 5%
Jaipur by Thornbridge 5.9% (I will be forever eternally grateful to Jeff for choosing this one – what an eye opener, and, recently revisited)
The evening, was, by common consent a success!
The ING London Beer Tasting Club was born, and, since then we have held many events both internal and external.
Jeff returned to do a Beers of the World tasting, Des De Moor hosted two tastings – London and Belgian inspired and earlier this year, Melissa Cole presented a beer and cheese pairing evening.

All of these have been well attended by my colleagues in London, and we have served our colleagues over 120 different beers in that time. 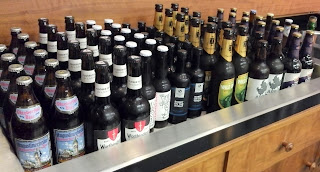 We (Clayton works in the Presentation Unit and is now my permanent partner in crime for this venture) also host two beer festivals a year, usually with a loose theme of some kind, the next one being on the 4th November – a low alcohol festival, no beer on offer will be 4% or above, but, every beer will be flavoursome.

External events have included tutored tastings at The Craft Beer Co in Clerkenwell, a visit to the London Craft Beer Festival in Bethnal Green, the City of London Music Foundation beerfestival held for one day in the Guildhall Yard and a visit to London’s most central brewery, a short distance away from Temple station.


We have a community page on the The Bank’s social media site – Buzz, where we advertise our events, and, add other beer related facts, events and links to my blog. We often receive feedback from colleagues in the Benelux (i suspect they are looking on in envy – well, that’s how I see it) and if asked i’d happily take the club global!


Naturally, over the 4 ½ years, we have learnt a few lessons along the way – what works, what doesn’t, what to do and what not to do, but, the aim has always been the same, to show that the world of beer is complex, fun, different, surprising and above all – bloody tasty! Long live beer!
Posted by mjpo007 at 06:06