Saturday 31st October, I became an Untappd Supporter, this allowed me to access some new statistics (I do love a good stat). Turns out October was a busy month, so, allow me to share a few beery highlights with you, in no particular order.

Last Saturday, the 24th, my girlfriend and I paid a visit to the Howling Hops Tank Bar, a short walk through the Olympic Park (your choice whether you go round or through Westfield Shopping Centre - I went round) at Stratford. This was my second visit, and, it will not be my last.
The first tank bar in the UK, with the beer being brewed and stored but yards away from the bar.
There are many things to love about this place, but, for me it is the beer. Apart from a few cans/bottles in the fridges, they sell only their beer, and, with beer this good, this fresh, why would you sell anything else? 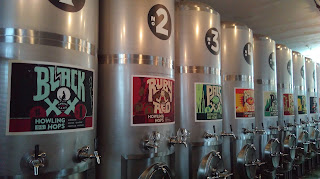 My beer of the month, perhaps unsurprisingly, comes from the aforementioned Howling Hops, their Rye Wit Pale Ale, which comes in at 5.2%. Personally, it is the best wheat beer I have had. Dry, bitter, with a hoppy hit and hint of the wheat on the nose, but, without those coriander and banana aromas/flavours that can sometimes be a bit too much. 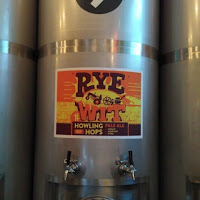 Honourable mentions go to:
Astaroth, a very nice citrusy golden ale from the ever reliable Oakham Ales, I had this at The Hydrant, a new Fullers venture in the heart of The City of London, well worth a visit if you are in the area.
Enlightenment Boom! 8.5%, an imperial or double IPA with bags of hops in it, by Renaissance Brewing Company. I had this at the rather wonderful Indy Man Beer Con, in Manchester. A celebration of beer in a most fantastic location.
(There are many blogs out there which eloquently describe the Indy Man Beer Con experience, go look them up, you won't be disappointed, although you might be a little envious) 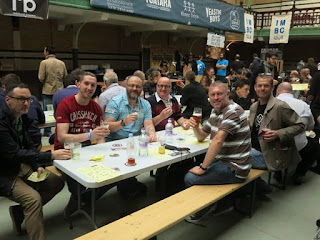 As a BeerBods subscriber, I thought I would try and choose a beer of the month, however, I couldn't split these two:
Cobbles & Clouds - Wiper and True 6.6%
A farmhouse saison. It was subtle, with a hint of lemon, but was easy on the Belgian funk.
(A BeerBods exclusive beer)
Tank 7 Farmhouse Ale 8.5% - Boulevard Brewing Co.
They nailed the farmhouse saison style without overdoing it. Great job by Boulevard, and a well done to BeerBods for putting it in the boxes.

The above are but brief highlights of my month of beer during October, roll on November!
Cheers,
Martin
If you want to know more about anything in this blog, feel free to leave a comment or contact me on Twitter @mjpo007
Posted by mjpo007 at 16:39