A weekend in London with friends and family Part Three 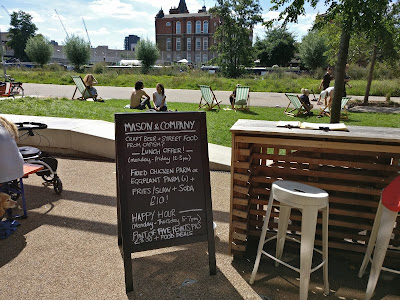 Now, if you have read parts one and two, it might come as no surprise that on Sunday, the day started a bit later than on the Saturday, but, breakfast / brunch was still provided by Costa's Café on the Kings Cross Road (can well recommend a visit if you want a decent bit of grub, as the saying goes "it does what it says on the tin"). Last Sunday was a lovely sunny day and time was on our side, so, we got a bus over to Hackney Wick, you see a lot from a London bus (also, as the Oyster machine was out of order, it was a free ride), I definitely spotted a few places I'd like to visit including pubs that advertise football and real ale / craft beer - heaven!
As you can see from the picture above, we paid a visit to Mason & Co. This my second visit to Mason & Co., the first was when they were in Shoreditch before Brewdog flashed the cash, and, if I am being honest I probably preferred the set up then versus this one now. Having said that, there's a lot to like about where they are now, especially when the sun has come out to play. The deck chairs and shades were all out in force on the River Lea at "Here East Campus" on the edge of the Olympic Park. 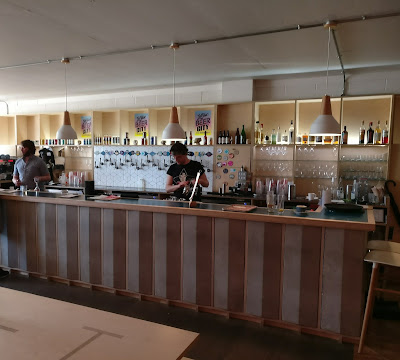 The service is top notch, as was the food we enjoyed, and I quite like the fact that it attracts a very mixed crowd, from the achingly hip (although I think a bloke in their 30s with the jeans halfway down his arse is uncalled for), to the families enjoying the Sunday carvery to the old guy with his greyhounds, which to be honest made him a bit of a babe magnet.
And, most important of all, a decent range of beers on tap (bottles and cans available too, but, I didn't avail myself of any). During London Beer City they had a Whitelocks (Leeds pub of note) Tap Takeover, Yorkshire beers it was then! We both started off Roosters Londinium, a chilled porter on nitro, very refreshing it was too. I was keen for us to try the two LBC beers, South London v North London was the theme, and the South, much to Michelle's pleasure, won hands down with the South Pacific Pale Ale, sadly the Pineapple inspired Agadoo was a real disappointment.
Time to move on. Following the waterway took us to the Howling Hops Tank Bar, a place that Michelle and I hadn't visited since November 2015, and, we immediately felt comfortable once inside. Hard to put my finger on why though, perhaps it is simply the sight of all those lovely shiny sliver tanks that are full of delicious fresh beer. 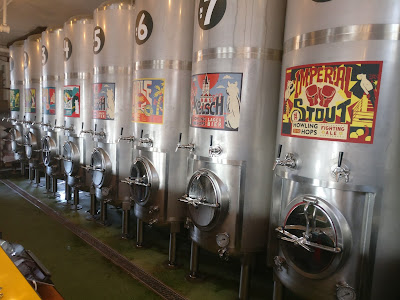 We found a little table against the wall near the bar and proceeded to work our way through a number of the beers on offer, we stuck to 1/3 pints, which worked perfectly for us. Recently, Michelle seems to be loving her sours & saisons, and, today she threw a wheat beer into the mix (the sour was really nice, sharp, fruity and tangy).. For my part I enjoyed all the beers I had, but, the NEIPA was a bit of a standout I must say. We both finished on the 11% Fighting Ale Imperial Stout, and boy did we both love it! My Untappd comments - "Easy drinking delicious impy stout. Coffee, bitter chocolate flavours without the alcohol burn." Michelle said "Awesome impy stout, smooth, great mouthfeel and delicious."

And, that as they say, was that. The beery bit of the weekend was finished. Great fun with my girlfriend, family and friends with some awesome beers and venues thrown in for good measure. We walked back to Stratford, past the fun fair (which I wasn't allowed to visit by Michelle.....) and saw the crowds on their way to the last night of the World Athletics Championships, it was an inspiring sight. As was this.