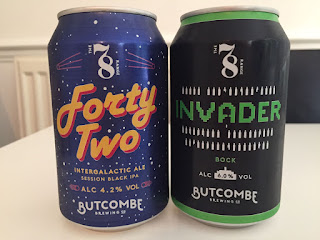 Yes, hard to believe, but I was around in 1978, at which point I was already living above an Off Licence (Unwins for those of you who are interested), Butcombe Brewery however, were only just starting out. To celebrate the year of their birth, they have introduced a new line up of beers under "The 78 Range", two of which were sent to me by Butcombe recently - Forty Two and Invader, a Session Black IPA and a Bock respectively.

I decided to share the tasting duties with Michelle, who very kindly agreed to help out (she's good like that), she also took the photos for me.

First up, was Forty Two, the Session Black IPA 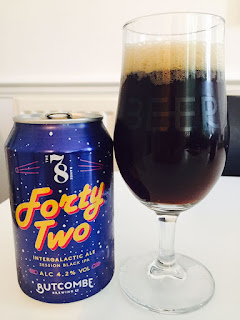 Love the can, a bit of a "space" feel to it, which I guess is appropriate as it is was in 1978 that The Hitchhiker’s Guide To The Galaxy gave us the answer to the ultimate question - 42, simple really.
(Incidentally Douglas Adams co-wrote my personal favourite Doctor Who story from the classic run - City of Death, filmed in Paris featuring Tom Baker as the 4th Doctor, even had a guest appearance from John Cleese).

Poured out nice and dark as you'd expect given the style, decent head retention too, always a good start to the proceedings. It's on the nose that I am sometimes wary of what a Black IPA might deliver, as personally I am not looking for those roasted toasty malty notes, and thankfully none of those were present. Although I am not looking for certain qualities I am always looking for a BIPA to be well balanced between the malt and hop notes and this was certainly the case, making this a session beer in its truest sense, I could have downed a few of them and chilled, it was all the more refreshing. It left a pleasant subtle sweet aftertaste, which only encouraged me to drink it rather too quickly, thankfully at only 4.2%, one can get away it!


Michelle's Untappd comments - Nice easy drinking black IPA, great taste throughout.
A thumbs up from both of us for beer number one. 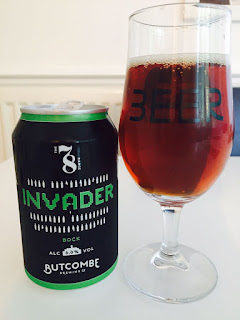 Space Invaders was launched in 1978, now that was a big deal! This really was the future, the world was never the same again. 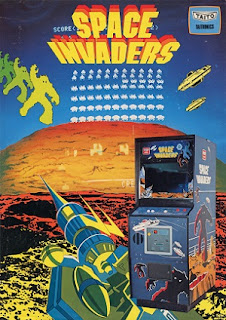 The Bock slides down the glass with a colour reminiscent of a Barley Wine, a lovely copper colour indeed. I was hoping for a little more carbonation/life, but, what little there was, soon dissipated. However, I found it be a good example of the style. Slightly sweet, with a hint of sour too. I found there was gentle spicyness present with the malty backbone provided good balance (something these beers definitely had in common was balance and drinkability).
Michelle's Untappd comment - Sweet, wine like taste. Not a style I've had many of before and not really for me.

Both beers were enjoyable, although naturally personal preferences played a part in our thoughts and opinions, we'd both definitely have the Black IPA again, and, I'd be keen to sample a few of the others from the 78 range based on these two offerings.

Thanks to Butcombe for sending me the two beers, no idea whether it influenced me or not, but, if you try either, let me know what you think, especially if you have tried them on tap.
Posted by mjpo007 at 08:18