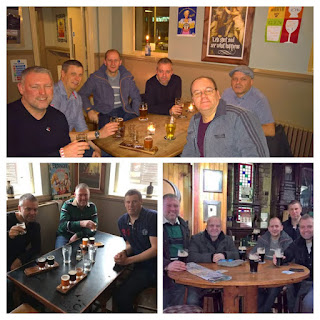 A new era has dawned (and no, I am not talking about Brexit or Trump's victory), the yearly trip to Butlins and all that entails has been consigned to history by my friends and I (we had a good run, the first trip was 2004 after all), it is time to explore a world away from the beer desert that is Bognor Regis.
So, goodbye Butlins, hello Dublin.
There's a lot to see and do in Dublin so let's get on with it!
First stop - Beer and lunch in an Irish pub, fortunately, Talbot Street (where our hotel was situated), offered such an establishment, The Celt. It was an Irish pub, with "Irishness" oozing out of every exposed brick and wooden beam. This is what we had come for. We were happy. A couple of hours passed by rather too quickly, until I reminded everyone that we were going to the The Open Gate Brewery at 5 via a pub where the Guinness had been recommended to me - The Bankers (Thanks Wayne aka The Irish Beer Snob ). Well, we duly sampled the Guinness, by that, I mean we had a couple of pints. It was nice enough, but sadly no better than the black stuff I drink on March 17th every year in North London with the family (another illusion shattered).
It had started to rain, but, being hardy souls, we decided to brave it and walk the mile or so to the Open Gate Brewery (like hell, we got taxis!!). Arriving in the second taxi first, three of us entered the building, set up camp, ordered our beers, and, started drinking, lovely. The group in the first taxi arrived around 15 mins later, they had a driver who "knew" exactly where they needed to be dropped off and it wasn't the place they had asked for, well, that worked out well. Finally, all 6 of us were together with our 4 samples chosen from a range brewed on site as part of their experimental program, this was a good moment - a choice of drinks and no plastic glasses, look at us go.
Now it's fair to say that all six of us are at different points on our beery journey - Karl enjoys trying new beers, both cask and keg, the others are willing to go with my suggestions, but, will usually end up with their default choices of alcoholic beverages. But, this is ok, these guys are mates from a time when my beery journey meant a walk to the bar and back, our annual weekend away isn't about that, so, I was a happy chap as they are good enough friends and are willing to indulge my geeky side.
We didn't all choose the same beers, but, we did find them all interesting if not always to our palate (Nitro IPA definitely wasn't a favourite for me, disgusting stuff).
We moved on and carried on drinking for a few more hours, pausing briefly at a Galway Bay Beer bar - The Beer Market, well worth a visit, our stay was all too brief.
After a lovely full Irish breakfast, Saturday saw us go on an open top bus tour, starting at O'Connell Street. I can fully recommend it as an ideal way to see much of the city in a short space of time, although we managed to stretch it out to around 6 hours stopping as we did for Guinness & lunch at Nancy Hands and Irish Coffee and rugby at O'Sullivans, followed by a visit to JW Sweetman where the word craft was not used sparingly, it was front and centre, the beers however, were on the whole a let down.
However, I was very excited about how Sat eve was going to kick off - Brew Dock, another Galway Bay bar was only 30 seconds from the hotel, however if you used Google Maps it was around a 10 min walk down every road other than the one we needed! With our collective thirst well and truly worked up, it was a delight to enter Brew Dock. 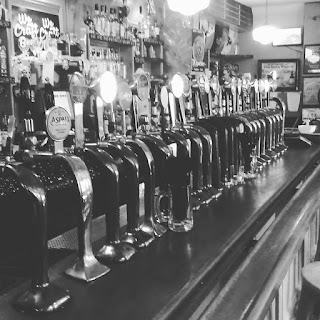 (All the taps!)
Four us availed ourselves of the tasting paddles and some very nice beers were sampled (highlights for me - Stormy Port, a rich thick porter and Goin' Out West, a West Coast DIPA that delivered everything you'd want from the style) before we headed to Temple Bar which was absolutely mobbed with numbers topped up by rugby fans.
Three of us - Neil, Karl and myself revisited Brew Dock the next day before our bus back to the airport and finished off the remaining Galway Bay beers available that we hadn't drank the night before.
We all enjoyed our two days in Dublin,  and I for one would have loved to have explored a bit more of the craft beer scene. What I did learn was just how Guinness, Dublin and Ireland and intertwined and the Guinness site is simply vast but there is a varied and interesting beer scene that I will be revisiting next Feb (more research).
Finally, as ever, I enjoyed my weekend away with the "boys", here's to 2017.
﻿
﻿
Posted by mjpo007 at 07:33