More to Berlin than Stone!

Bloody British summer, mid September and it's peeing it down at London Stansted on a Friday morning as we are due to take off to go to Berlin for my brother's stag weekend. Fortunately when we arrived in Berlin we were greeted by clear blue sky and warm sunshine but better than that an Oktoberfest bar is waiting for us 10 metres outside arrivals what where we to do? Only one thing you could do in that situation, have some beer. So, Brian (my other brother) myself and one of our mates sat ourselves down for the next 3 hours before deciding that we really should make an attempt to get into Berlin! Upon arrival at Tempelhof in Berlin we met up with my brother Paul who's stag weekend it was, and guess what? He was in an Oktoberfest bar outside the station (great minds think alike).

The main plan for the Friday evening was going to watch a local Berlin football team play in what used to be East Berlin. By early evening there was a small group of us to go and watch the football. Upon arrival at the venue, we spied a Veltins pop up bar selling beer for around €2.50 for 1/2 litre. This is not my favourite pils, but at €2.50 outside a football ground, I can learn to love it a little bit more! Even more astonishing to an English football fan was the fact that once we got in the ground the beer was not only the same price, but I could buy, drink and watch the game all at the same time (incidentally, cost of my ticket for the football - €15). 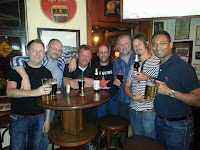 After the match we went to an Irish bar to watch the conclusion of the Chelsea vs Liverpool match (a good result for my team as we beat The Blues 2-1) many more pils were consumed, although none of any note, plus a disgusting Irish red ale which I am pretty sure I didn't finish. On the Saturday we went to Stone Brewery, and if you want to read more about that click feel free to click on the link:
http://blogno1mjpo007.blogspot.nl/2016/09/welcome-to-stone-berlin.html

After the rain of Saturday, I awoke to find Berlin was basking in glorious sunshine, clear blue sky, therefore, not wanting to waste the lovely weather I abandoned my room mates and walked the 5/6 kms to Alexanderplatz , taking in some lovely scenery and history.

For those of you that haven't been to Berlin, Alexanderplatz is where the tower and the world clock are, also, features in the second Bourne film as Jason once again outwits his previous employers! However, I was in the area to outwit no one, I was there to visit another craft bar (thanks to Nate @NateDawg27 for the recommendation). Allow me to present to you - Lemke Berlin
http://www.lemke.berlin/bhm_ueber_uns/device.desktop/lang.en/ 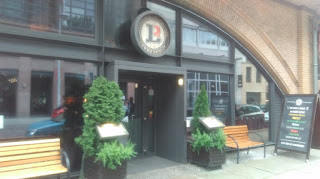 So, it would appear that setting up under a railway arch is not just something we do here in the UK, those Europeans types do it also! And, what a lovely space it is, very warm and welcoming the moment you step in the place. Immediately you can see that they take beer seriously, but, the way the bar is set up you can just sit down, ignore all that craft beer stuff and order a beer and food. It is simply somewhere you can relax, have a beer, or all the beers (just for the record, I did the latter) and chill, while contemplating the upcoming match between Hertha Berlin v Shalke. 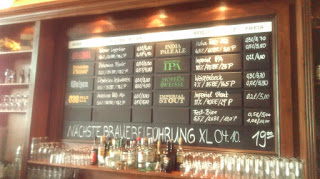 The tasting selection consisted of Bohemian Pilsner, 030 Pale Ale, Lemke Original, Weizen, Hopfen Weisse & India Pale Ale, with the standout being the India Pale Ale. I can also vouch for the food in this place too, tasty and reasonably priced. I followed up the tasters with a 1/3 of each of the Imperial IPA and Imperial Stout, again, the IPA was the standout. Lastly, as it was Oktoberfest season I also sampled the Festbier, a good example of the style. Finally, my room mates had arrived, enough time for another beer before heading to the Olympic Stadium for the football. 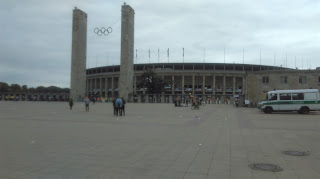 And, what a stadium it is - awesome springs to mind but doesn't seem to quite cover it in all honesty. Once again, beer in and around the stadium is positively encouraged, All of the food joints sell beer, it really is a revelation once again to someone schooled in the English game which effectively says I can have one but not the other. This is the same stadium made infamous in 1936 by Jesse Owens winning 4 Gold medals which rather upset the Fuhrer, or, so we are lead to believe! (Hertha Berlin won the match by the way). Berlin is a City that should be visited for so many reasons, and, i hope over the course of two Blogs i have given you a sense of the place (even if it was mostly about beer and football, sorry...). Whether it be the football, the beer, the pubs/bars, the culture, the history, there is a lot to love about Berlin.