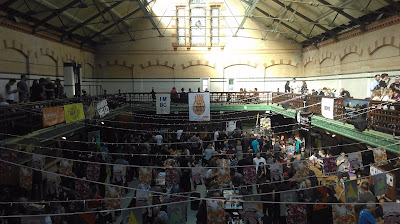 (The view from our table @ Indy Man this year)

2015 was the first time I attended the Independent Manchester Beer Convention (Indy Man), and I absolutely loved it, easily my favourite festival last year. However, being as I had been blogging for only a few months I decided against commenting and contented myself with reading some excellent posts from other well established bloggers.
Fast forward a year and it is nearly a week since I once again attended the Saturday afternoon session of Indy Man, again travelling with my beardy beer buddy, Clayton and my lovely girlfriend Michelle who was popping her Indy Man cherry. Once again, we were blessed with glorious weather up North, which makes queuing up a much pleasant endeavour. 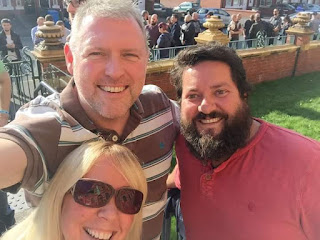 This year, not only have I decided to type up a few words, Steve (@BeerOClockShow) and I have shared our views via our weekly podcast, Hopinions: http://www.beeroclockshow.co.uk/2016/10/hopinions-05-indy-man/
Here's what I loved this year:
1. The Venue! Simply put, it is a stunning place, inside and out. Any event being held here will be enhanced just by making this choice. (http://www.victoriabaths.org.uk/) I believe there is a trust that would love to raise enough money to one day return the Victoria Baths to it's former glory. Wonderful, hold on though, where would Indy Man go? Now, I am torn.....
2. Logistics. So many times, organisers behind events (not just beer festivals) forget the simple things and the huge benefits of marginal gains, the folks at Indy Man did not. Well done. Queue management - with 15 mins to go, volunteers started making their way through the masses of eager beer people to check tickets and provide a wrist band, this helped to clear a bottleneck when entering the building. But, they didn't stop there, they were also selling beer tokens that could be purchased by cash or card. Seemingly so simple, but, made a huge difference in my opinion, which meant that all you had to do was pick up your glass and off you go to go your 1st beer. Last, but, not least, the Wild Beer Marquee opened up a whole new space, Saturday afternoon did not seem so busy as last year.
3. Tokens - Easy to remember system. 1 token = 1/3 beer. 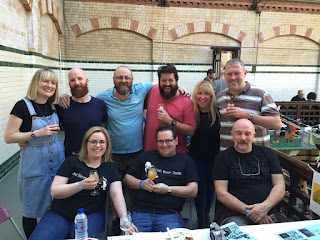 4. The people. Unbelievable, people who tweet, blog and podcast are not only real, but, on the whole a pretty nice bunch too, who knew? Whether it be people I have met before (see above) or putting faces to names (Twitter handles) I always love this bit - a complete joy. You lot are wonderful, BIG hello to you all. Also, a shoutout to the volunteers, without whom I assume it would be a bit more of a struggle to run this event (and others like it).
5. The Beer! 5th on the list, what is the matter with me?!?!? I reckon if the beer choice was poor, I would have found a way to mention it sooner, but, I think this says a lot about Indy Man, that the quality of the breweries invited and the beers presented has not been mentioned yet. let me just say, I did not have a bad beer or a bad beery experience. I went DIPA heavy early on (all part of the plan, honestly!), special mention to Northern Monk Double Heathen AND the Throne of Cans!
Question: What happened to the cans everyone sat on??? 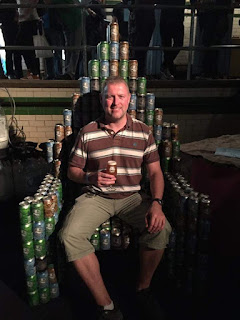 Could do better:
1. Tokens/Pricing - Simple? Yes. The right way? Not for me. I would have preferred a bit more flexibility, or, even a cash element. However, from an admin point of view, spot on. Also, pricing structure should have been announced at the same time as ticket prices.
2. The Glass - I loved last year's Craft Master One sponsored by Cloudwater, with 1/3, 1/2 and 2/3 markings, bloody wonderful. I could have small measures and I could have sociable measures, you know, the ones where you can chat away not worried that the liquid has evaporated before your very eyes. Also, very fragile, hoping to look after mine and put it on eBay in a couple of weeks, should be worth a few pennies! 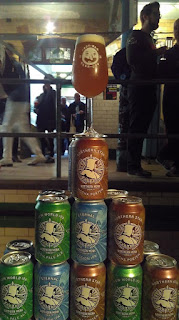 (Not the brightest idea, but, I got away with it!!)

3. Food prices - Seemed expensive to me. I am judging the quality or the quantity here, purely how I perceived the price points to be, and, for me it was a bit much.
4. Water stations - where were they? Bit ironic that I was in an old swimming baths, but, water was one of the hardest commodities to come by. I understand you could buy a bottle and get it topped up, but, why not just have water stations? CAMRA would at least have been pleased to see their example followed on this.

Overall though, I had a fantastic time and the same goes for those that I travelled with. The "could do better" was easily outweighed by what "I loved". This festival still remains high up on the list and rightly so. If you haven't yet been, you should make every effort to attend in 2017 - see you there. 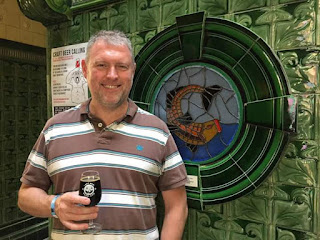 (Until next year fish mosaic)