VR & Beer - A match made in a virtual heaven? 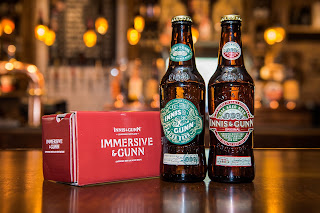 You've heard of Beer & Cheese pairing, but, have you heard of Beer and Virtual Reality Pairing? No? To be honest, nor had I!
After what felt like a very long day in the office (it's been one of those weeks to be honest), I found myself heading to North London, specifically to the Brewhouse & Kitchen in Highbury noting that come Sunday the area will be very busy as Arsenal take on the mighty reds from Merseyside (yep, I am a Liverpool fan, and will need to locate a bar with a television by 4pm on Sunday). There was a nice buzz about the place and the bar had a familiar and welcome feel about it, much the same as the one in Angel, well worth a visit if in either area, you will find a good selection of beers and the food menu ain't too bad either. With name ticked off the guest list I was immediately escorted to the bar and offered an Innis & Gunn Original or their Lager, it was a warm evening and after two trains and an obscene overcharge on my oyster card, I gladly accepted a pint of the lager, cold and crisp and only 4.2%, it was just what I needed.
All well and good so far, but, why was I there anyway, hardly en route to North Essex is it....the reason was courtesy of an invite from Innis & Gunn to attend the launch of Immersive & Gunn, a virtual reality beer experience, sounds interesting eh? It turned out to be more than interesting, it was a fascinating experience, one I hope many others will get to enjoy, gimmicky or not (I'll let you decide) it did deliver a unique experience. The principle behind this was actually quite simple when explained by Dougal (the owner of Innis & Gunn who I got to chat to), it is designed to take you away from familiar surroundings, the pub for example, and get you to reassess your beer afresh. Does sound a bit gimmicky? One could argue that is the case, however, the guys at Innis & Gunn took the concept very seriously and worked with a Cognitive Neuroscientist (Dr. Jacob Jolij), this is what he had to say on the subject: "A taste experience is not just a matter of chemistry and biology. Whenever you take a sip of your favourite beer you do not just taste the water, the grains, and the hops, but your brain adds in your previous memories, surroundings, and expectations."
I had never given it much thought before, but, had to agree, we are definitely influenced by surroundings, perception and memories, an obvious example of this is when I visit a brewery tap room - I immediately expect the beer to be bang on form and delivered exactly as intended (whether that happens or not is another matter, but, that is the default starting position and to be fair I am rarely disappointed when I visit a tap room). So, having bought into the idea, the discussion with Dougal broadened covering many beery topics such as glassware, US v UK craft beer scene, rebranding (keep your eyes open for this one, they are all very excited about it) and continued innovation. Must be said that for someone who has been brewing for 30 years and running his own brewery for a lot of that time, his enthusiasm was infectious, a real pleasure to chat with. Innovation was really what the VR experience was all about, they want to innovate from all the angles, from the product, to the branding and this was just another example of that desire to keep up with and ahead of the curve. 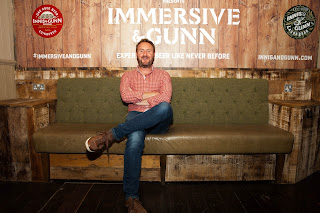 (Picture of Dougal relaxing before the launch - courtesy of Innis & Gunn)

The time had arrived to don the VR Specs, and, plug into a new world.......bang! It is a weird experience initially leaving the wearer slightly disorientated, especially as you are supposed to be drinking either the Original or the Lager depending on which virtual world you have stepped into. First up was the Original, which as most of you are probably aware is where it all started, oak aged beer from the cask (although now that oaky aroma and toffee/vanilla flavours come from the oak and beer passing through the Oakerator, which Dougal assures us, delivers exactly the same profile as if the beer had been matured in the barrels) was sampled while enjoying the new surroundings of woodland, open fields and cliff tops.
Second beer (the lager this time), second experience - water landscapes and a beach beckon - two visits to this world for me as I really enjoyed this one especially.

(Both pictures courtesy of the Innis & Gunn press release)

Glasses off, it was time to reflect and discuss how that all went. Firstly, it was absolutely amazing, to actually feel like you had been transported to another place in the blink of an eye was simply mind blowing, especially to someone who had never experienced VR previously. the technology is awesome, the future really is here. Secondly, it did indeed give you a different perspective whilst drinking the beer, it was very tempting to sit down on the beach and carry on drinking the lager (although this would have looked to everyone else in the bar as someone simply sitting on the floor with a pint in hand!) whilst looking out at the sea, it was rather relaxing and one can only imagine the possibilities this technology can bring us. As to whether it enhanced the beer experience - it is really hard to deliver an objective opinion here as I already have an appreciation of the beers Innis & Gunn produce and the jaw dropping tech simply blew one's mind away, so, it is probably best to simply say try it yourself and see what you think, if nothing else it is certainly a unique way to drink beer (and ever so slightly difficult).
A big thank you to Innis & Gunn and their friends at Manifest for the invitation, the beers and above all the experience as a whole - a fun and interesting evening was had by all.