Birmingham Beer Bash - That was fun! 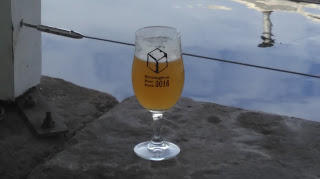 Saturday 23rd July, went for a run, abandoned son to an afternoon with his grandparents (still not sure they "get" Pokémon Go though) and headed off to Birmingham with the youngest of my two brothers. It was time for his second craft beer festival, having attended Craft Beer Rising with me back in Feb, this time we were going to get it right (no falling off the cliff). First up - food, hello Subway! Grab water and Four Pure Session IPA from M & S, for the train journey to what was once the industrial heartland of the UK. Arriving in Birmingham, you are greeted by a very clean modern train station at New Street, felt more like an airport terminal﻿ to me, which when compared to some stations, made it feel very pleasant, open and bright. We took the exit pointing towards the Bullring (Shopping not involving beer or food I presume, so, we swerved this) and after a pleasant walk of around 10/15 mins we arrived at The Bond Company. 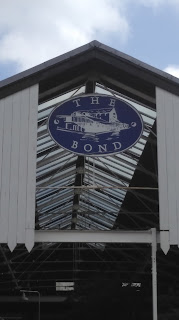 The Bond Company is a wonderful example of what can be done to conserve previously derelict buildings, creating a wonderful multi purpose multi functional space, the Victorian buildings look fantastic and any event would be enhanced by hosting it here.
Which brings nicely onto the event in question - The Birmingham Beer Bash. 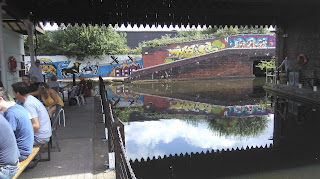 It's a much smaller event than say Craft Beer Rising, or, Indy Man, but, the charm of the venue grabs you immediately. Whether that be the aforementioned buildings, or, the canal, even the graffiti that can be seen, somehow adds to how everything looks and feels. As ever, the weather played it's part - it was a shades and sun cream kind of a day. Organisation was good, mobile tech being used to good effect, tickets scanned, pick up glass with tokens, or, without, depending on your booking, and, off you go to find beer. (There was a technical hitch with the credit card payments, which I think some found frustrating, probably none more so than the guys selling the tokens!) Now, I know not everyone is a fan of tokens, but, I haven't got a problem if that's the route the organisers feel is the best option for them. 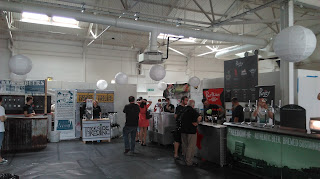 One room housed all the beer, making it rather a simple affair to browse, choose, sample and buy. As ever, everyone serving had time for the punters, and, it is always a pleasure chatting to people who have brewed the beer are in some way connected to the brewery, brings a personal touch, one sadly lacking from more traditional beer festivals most of the time.
The atmosphere was very friendly, and, I bumped into people I knew, people I had previously met and those I only knew from Twitter, on top of that I had a interesting conversation with Malster, it's possible I have even remembered some of what he said. A lot of fun was had and a fairly considerable amount of beer was consumed, but, all was conducted by everyone concerned with a smile on their faces. Unless circumstances change, I will be returning to this event in the future. A big thanks to everyone who helped make it what it was. 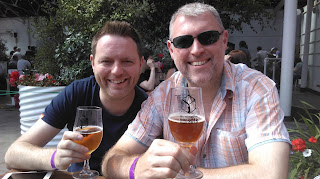 My youngest brother and myself enjoying sunshine and beer. 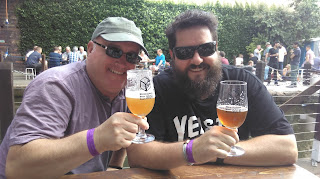 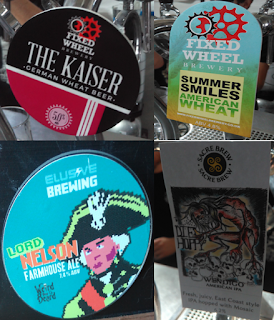 My beery highlights - you can find my rating and thoughts on Untappd.
Posted by mjpo007 at 08:44