Well, that really was a fun evening, and, to think I was in two minds about whether to attend or not……

This was the 8th time the @sxbottleshare *crew/massive/gang/collective (*delete as applicable) had gathered on the first Tuesday of the month, oh how the months have flown by and it would appear from the list below that some of us are already preparing for the winter months, although that could just be a reflection of the rubbish summer we have experienced to date!

Many of us were there at the beginning and some have been ever present, not me though, I have missed a couple due to one of my other loves - running (5k race series in Harwich). That being said, we usually have at least one newbie, and, Tuesday was no exception, however, with our common interest of beer it doesn't take long for us all to interact, firstly at the bar, then at our designated table, kindly reserved by the @Alehouse_Cford

For those of you who don't know how a bottle share works, here goes:
A group of like minded individuals meet on a regular basis, bring a bottle to share, open, share, drink and discuss.
Simple really, which is often the way with the best things in life.

Personally, I think there are a few things that make the bottle share a very enjoyable experience (in no particular order):
Tuesday was no exception, we all had a lot of fun, tried some great beers (looking at you here Tom), some interesting ones and a ghastly one (what were you thinking Shaun??).

I am very glad that I decided to pull myself away from the Transfer Deadline Day events on Sky Sports News on the last day of my annual leave in order to attend.

Rather than provide you with our tasting notes, I have listed the beers below and just for fun who presented them. However, we all tappd the beers in, so Cyberspace contains our thoughts on all of the beers below.

If you get the chance to organise or attend a bottle share - go for it, you won't regret it. 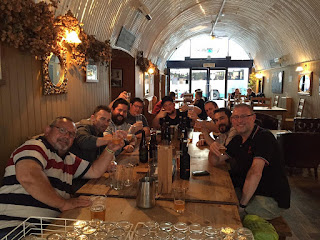 The SX Bottle Share (early in the proceedings!) minus official photographer, thanks Steve.
Posted by mjpo007 at 15:05