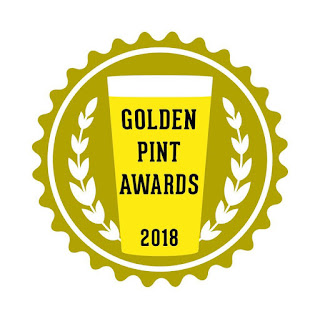 No preamble, no waffle, let's get on with it (after all, we have Hopinions for all of that!!)…...

Now, this was a tough one for me, given that I usually look to the cask options first when out and about, with keg being my second choice. However, I was playing darts recently at lunchtime and enjoyed a few pints of Beavertown Neck Oil. At 4.3%, I think it qualifies as sessionable, and, it was tasting absolutely top drawer (didn't help improve my darts though, pretty dreadful I was!). 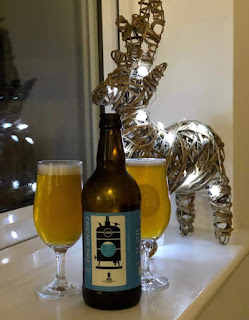 At the moment, it's anything from North Riding, a wonderful, pretty recent find for me and all because Michelle keeps ordering them from Sean at Beer Central. Traditional in appearance perhaps (500ml bottles) but, impressively tasty beers with bold flavour profiles at the sort of abv where if you want to enjoy more than one, you can. I need, and want to sample their beers on cask.

At home, we tend to have a lot of one-off cans in the house, although that did change when Thornbridge released Jaipur in 330ml cans available in Tesco, we definitely had more than one can of that in Dave's Beer Cupboard! I have also really enjoyed the Cloudwater small beer series, lower abv they might be, but, big on flavour and mouthfeel they most definitely are. 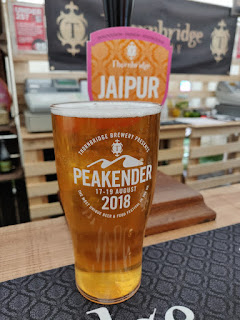 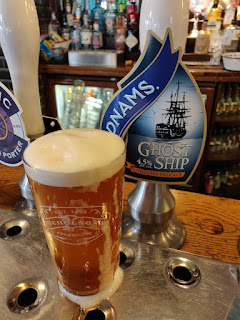 Thornbridge Jaipur and Adnams Ghost Ship (guessing that's not a shock to anyone!). Sorry, I really can't choose between the two, both to me are superbly drinkable and while I like all formats that these two beers can be dispensed from, it's on cask where they truly shine, in my opinion. Honourable mention to the stalwart that is Timothy Taylor's Landlord. 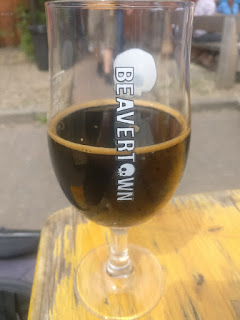 This award goes to a beer I have tried only twice - Beavertown Tempus Project Heavy Lord. A 14.5% beer that I had on tap, at Beavertown, one warm sunny afternoon with Michelle and very recently at SXBottleShare (remains a highlight of my month, every month), on a not so sunny Tues evening in December! That last tasting merely confirmed what I already knew to be true - astonishing beer.

While some UK breweries seem to be almost ashamed of their West Coast IPAs, my honourable mention goes to a beauty of a beer created by Thornbridge and Cigar City - Jai JAI, all that's good about a style of beer that I fell in love with a number of years ago, thank you!
But, the winner is Beavertown Tempus Project Heavy Lord, their collaborators in crime - 3 Floyd Brewing Company.

While Beavertown have scooped two of my awards (forget the Heineken investment, that's the cherry on their 2018 cake!), it is Thornbridge and Adnams, in a dead heat once again who scoop my best UK brewery award. They consistently deliver fantastic beers in all forms of dispense and are both here to stay, as are their flagship beers (I really hope that hasn't jinxed anything!!). And, to cap it all, they both launched excellent no alcohol beers this year, cheers 🍺. 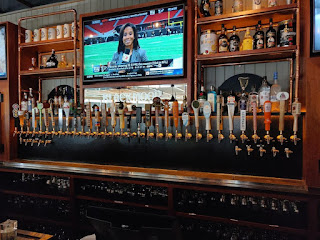 Cigar City Jai Alai, a few pours of which I enjoyed in Boston while consuming 12 wings for $3 - WIN! (I almost missed it, in amongst the vast array of taps at Blackmoor Bar and Kitchen) 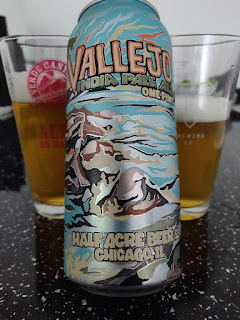 Half Acre Vallejo, West Cost IPA that comes in at 6.7%. Absolutely bang on! Clear, crisp, piney, bitter and leaves you wanting more. If I go to Chicago, I will be visiting the tap room. 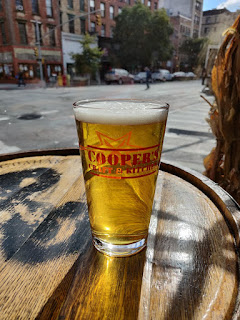 Half Acre, Chicago. Producing the style of beers that i fell in love with back in 2011, and doing so very well. Had a pint of their pilsner in New York back in october and they "smashed it".

The Victoria Inn - My preferred option in Colchester, a proper pub is a very apt description for this wonderful place, and 6 months on from leaving Colchester, i still miss it (although i guess that's testament to how good it is in the first place).

The Ale House - My preferred option in Chelmsford (and home of the UKs longest running Bottle Share), always a great choice available - cask, keg, bottle and can.

The Globe - Near the office, a Nicholson's pub, with up to 8 well kept beers on cask, full macro range offered also (great for colleagues who regularly think I am tricking them when I order cask with a slightly odd name), and a few crafty cans in the fridge. 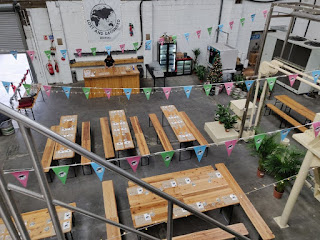 UK - The start of the 2018 Crimbo Crawl - Lost & Grounded in Bristol. Plenty of space to enjoy their beers and the surroundings, if in Bristol and they are open, go visit, if for no other reason than to drink Keller Pils at the source. 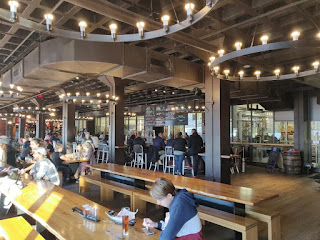 ROW - Harpoon in Boston. Set alongside the waterfront, the taproom is a rather large affair that encompasses plenty of seating, a big bar, shop where you can get a wide variety of their beers and merchandise too, AND, pretzels. Oh my god, these were bloody wonderful, more like warm soft bagels, with a choice of dips - quite possibly one of the best foods i have ever had to go with beer. Special thanks to the guys who gave Michael and myself a tour and tasting before we relaxed in the taproom.

Supermarket of the Year

M&S – Choice & Accessibility, they provide me with the bulk of the train beers I consume. Honourable mentions to Tesco and Waitrose. The Supermarkets have been upping their game throughout 2018.

Train Beer of the Year

Four Pure Session IPA, I just find this beer super consistent and easy to drink on the go, and, available in M&S (no change from my 2017 award).

Independent Retailer of the Year

Liquorice - Ever expanding range of craft beers, 2 mins walk from a mainline station I go through every day so easy to get off, stock up and get back on the next slow running train. I need to pop in more often, sorry Dan, I'll do better in 2019!

Online Retailer of the Year

Ales by Mail are sadly no more, but, would have been my clear winner. I don't order much online to be honest (apart from work beer tastings), but, Michelle does, and she loves the service Sean at Beer Central provides. 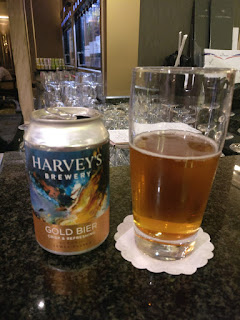 Harvey's canned range that i first discovered on the cruise back in April with Michelle, some simply stunning artwork, and the beer in the cans wasn't too shabby either!

Beer Festival of the Year 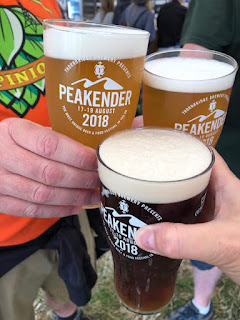 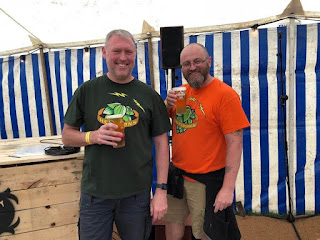 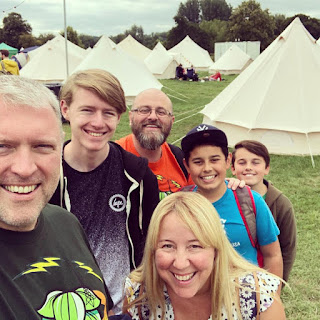 Peakender - Really was going to be only one winner this year. I can see why people have been raving about it previously, the only "downside" was that it was so damn popular Saturday afternoon which lead to quite long queues for the two bars. However, I think Thornbridge will be all over this next year. This festival also featured "Hopinions Live", a very enjoyable experience, so, thank you everyone who came along an joined in, hope to do it again some time in the future. 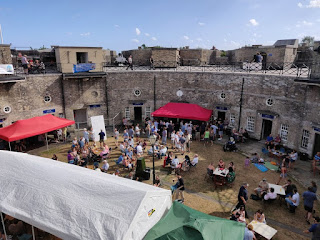 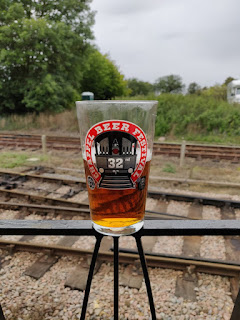 Everyone who takes the time to comment on the weekly Hopinions polls, without which we wouldn't have a lot to talk about on the show.

Beery Podcast of the Year

In 3rd place - Beers Without Frontiers
In 2nd place - Rhythm & Brews
And, the winner is - Men Beerhaving Badly. Well done guys, looking forward to hearing your dulcid tones as the journey continues!
Honourable mentions - Steve & Roland’s Beer Podcast and of course, my good friends - The Irish Beer Snobs.
(Shout-out to Rob @HopZine for his pioneering work on You Tube)

And, there we have it, that's my look back at 12 months in beer, I'm pretty sure I've forgotten something/someone/a particular beer or festival so apologies in advance as they say.