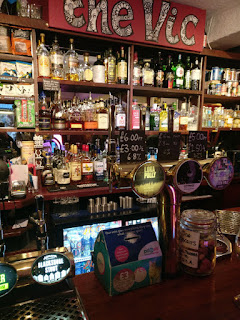 I'm leaving Colchester, Essex to move in with my fiancé Michelle (her lovely daughters and of course Dave the bulldog), also of Essex, but, south rather than north. I have lived in Colchester since January 1995, 5 years before my son Michael was born and 20 years before I met the woman who will become my wife in 2019. Basically, it's been a while! I like Colchester, but it's time to move on, time to say goodbye, so I thought I'd have a little wander round the pubs I like to frequent or use to visit on a regular basis. Now, I think Sundays can be an underrated drinking day, and, fortunately my friend Karl is also of the same mind, so, he agreed to join me on a Colchester crawl (also partially inspired by friend and fellow beer communicator Justin Mason who went on a ramble down memory lane, and, when I say ramble, I am being literal......) a few weeks ago, here's where we went....... 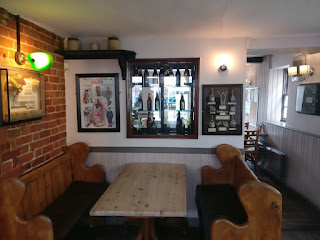 Pub number one was the Hospital Arms, an Adnams pub, opposite Essex County Hospital, just on the edge of where Colchester town centre starts (well depending which direction you are heading in from). Now, you know it's going to be good day when this is available: 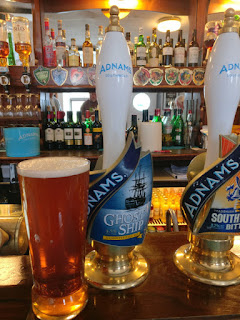 It's no secret I am a big fan of both Ghost Ship and of Adnams and I am rarely disappointed by the beer or the pubs, I am definitely going to miss this aspect of being closer to Suffolk than I will be in the future. The beer didn't last long, so, off to the second pub - The Kings Arms. 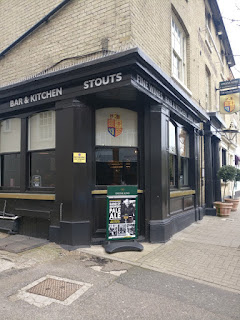 The eagle eyed amongst you will already have spotted that this is a Greene King establishment, however, it is a pub I have frequented over the years, especially on a night out with the lads as it's a big pub and always lively on a Friday or Saturday night. Having said that, it's been a while since I last popped in and I was both surprised and very happy to see Timothy Taylor's Landlord on offer..... 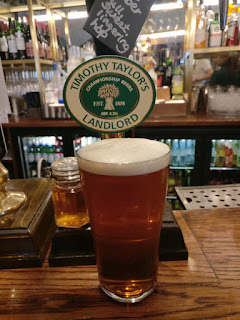 Sunday was getting better and better despite the fact that the weather wasn't much kop which in turn meant there was no need to visit the rather large and spacious (and very busy in the summer) beer garden out the back.

Disclaimer: Before these first two beers I had thought about having only half pints during the course of the day, well, that lasted long didn't it?!?!?

Pubs three and four are opposite each other on Butt Road - The Fat Cat and The Ale House. 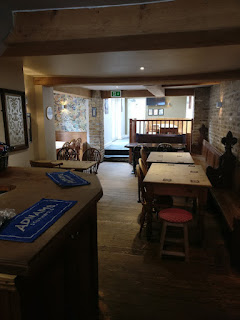 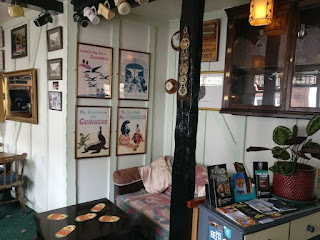 The Fat Cat might well have Adnams bar towels but none of their beers are usually on offer (well, not in my experience), they have a mix of hand pumps, taps and beer on gravity, however, the day we visited the choice was a bit lacking so we both opted for a half pint of Pilsner Urquell, always refreshing and hit the spot as expected.
Over the road to the pub previously known as The Dragoon until it was taken over by the previous landlord of The Bricklayers (used to be an Adnams pub at the end of my road) and renamed The Ale House, run by Pauline. Again, they have a mix of hand pull and gravity, we opted for a lovely tasting pint from Tiny Rebel, Apache and discussed which pub would be lucky enough to see us next.......


The Odd One Out on Mersea Road is a favourite pub for many in the area, however, I've never taken to it, but, we decided that since it had changed hands recently (now run by Colchester Brewery) we should pop in. We popped in, had a half, we departed. I still don't get it.


Heading back towards the town centre, we call into the Queen Street Brewhouse, quite a quirky building, but not displeasing to the eye. Decent size bar area with a mix of keg and cask available, we opted for the Thornbridge Cocoa Wonderland and as the weather had improved, too ourselves off to the "secret" beer garden. 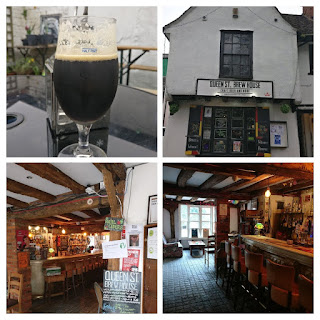 ﻿The next stop was the Three Wise Monkeys, and, like the Queen Street Brewhouse is a relatively recent addition to the beer drinking scene in Colchester. Split over three floors it feels like a "craft bar by numbers", and that's not a criticism on my part, this type of place was most definitely needed in Colchester. Somewhere where a good mix of people can meet, eat & drink, it ticks a lot of boxes. 1/2 pint of Gamma Ray - thank you very much! 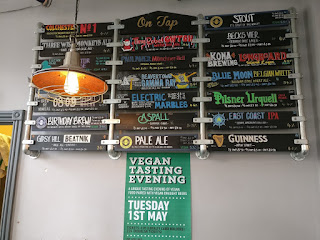 It might come as no surprise that we were aiming to finish in The Vic, however, there were a couple more destinations to visit before we ended up at my favourite pub (see the picture at the top of this post). So, we headed to the Purple Dog, situated off the main high street in what I like to refer to as  the older part of the town centre, where you might find a few quirky shops and cobbles. 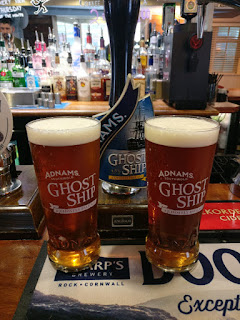 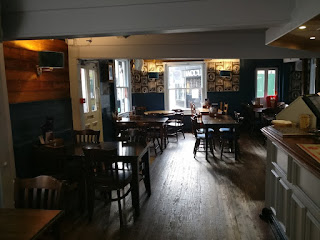 It's a pub I have often overlooked, especially in my "younger" days (yes, there were some, thank you very much!!), but, it well worth a visit I'm must say. Now, I am sure there are cynical amongst you that will say "it's all about the Ghost Ship...", however, the cask selection was pretty good that day in addition to the aforementioned offering from Adnams and there's a comfortable feel about the place, almost café like at times.
Almost time to hit up The Vic, but, one more pub en route first.....Wetherspoons Playhouse. 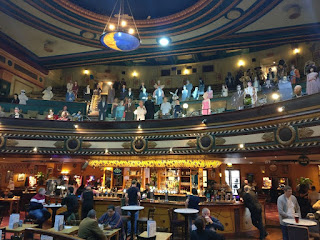 It's a bloody beautiful building and I am so grateful that it has not been left to rack and ruin unlike the old Odeon in town. You can still pick out the stage at the back, and look at the audience in the circle, I love it! Finally, Karl & I end up in The Vic. We drink a few more beers in here, and as ever, could have stayed until asked to leave!

Will I miss Colchester and the pubs contained therein? Yes.
Will I be back to visit some of them? Yes, of course!