To Dublin and Back 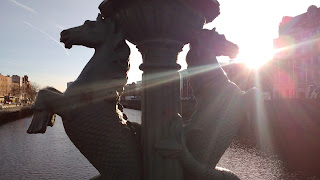 The Alltech Craft Brews & Food Fair in Dublin held between from the 23rd to 25th Feb had been in the diary for around 6 months, and, having been to Dublin with friends back in November I was looking forward to a quick return. Accompanying me on this journey was Mr Beer O'Clock, Steve was making a return visit to the festival having attended in 2016 with No.1 Fan, Myles Lambert.
After a surprisingly pleasant experience (a few beers at 'Spoons helped) at Stansted and despite Storm Doris's best attempt, we arrived in Dublin in good spirits. A taxi ride to our accommodation, followed by a 30 min walk to the Dublin Convention Centre meant that we had Irish beer in hand by 5.30, not bad going at all. The first thing that struck me when I walked in was that this festival had a unique feel to it, a different flavour, certainly the set up was one I was unfamiliar with. 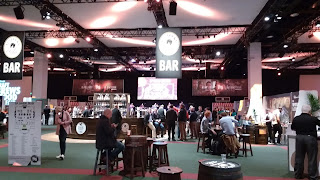 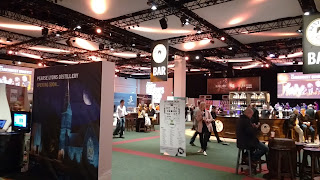 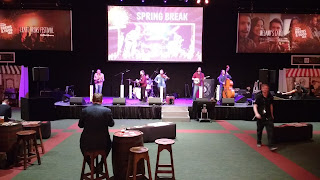 As you can see from the pictures there's plenty of room, and although this was early doors on the Thursday, that feeling of space never deserted me over the three days we were there. Steve described it last year as reminding him of a trade fair and I can see what he meant, however, in no way is this meant as a criticism. No doubt you will have noticed the big screen and the stage, well, there were three big screens and these came into their own on the Saturday when the rugby was on, making for a fantastic atmosphere. The stage, much to my surprise was occupied near enough on a full time basis by a variety of acts (although not while the rugby was on) throughout the festival. Now, a few of you who listen to the Hopinions podcast on a regular basis might already know my views about music at beer festivals - I could do without it, especially when it is too loud, which on occasion it most certainly was, most notably on the Friday night. Although I will temper that by saying the acts were rather good and the noise levels did not go unnoticed by the organisers, something I think they will bear in mind in 2018. During the rugby, I thought the commentary was pitched at just the right level. 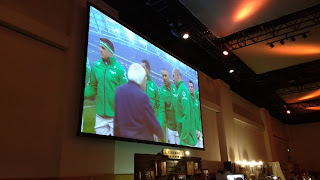 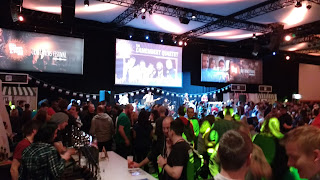 Water water, nor any drop to drink......but, wait, no this wasn't the case, not only was there water, there was also rinsing stations - GO ALLTECH! Love the bloody lot of you, simply for getting this bit so right. Another benefit of the venue - toilets, lots of them, there was also a breakout area near the entrance which was a nice touch.

WHAT ABOUT THE BEERS? I hear you cry.....well, here goes!
My beer of the festival was The Hare And the Hag by The White Hag Irish Brewing Company in collaboration with Kinnegar, a simply divine Irish Coffee Nitro Stout - Smooth, coffee, chocolate, velvety were just a few of the words I used to describe it.
All the beers I tried from McGargles impressed me, so much in fact that I definitely visited them everyday and sometimes twice in one session (interesting fact - they brought their tap room bar with them to the festival). The Little Bangin' IPA, Francis' Big Bangin IPA and Double Bangin' IPA coming in at 3.8%, 7.1% & 8% respectively were all great examples of the West Coast style of IPAs. Sessionable in terms of flavour profile, these beers were really well balanced and I definitely tried them more than once!
Wild Bat Garage Days, an American Pale Ale was my favourite APA of the festival, a respectable 5%, that kept me company during the Ireland v France 6 Nations match.
The Full Irish from 8 Degrees Brewing weighed in at 6% and had been recommended to me by a few people and they weren't wrong, held it's own against the other IPAs I had enjoyed, lovely dry bitter finish too.
Trouble Brewing had a good range available but the best for me was the Sabotage IPA, leaned slightly to the British style of IPA rather than the US, but, it was still fruity, hoppy with a dash of sweetness.
The Oatmeal IPA Limited Edition No.5 from Hope Beer was a little different, but, very drinkable, well balanced with a soft mouthfeel.
Now, the next beer might surprise you, it's Proper Job from the guys at St. Austell, on keg it was blinding, if you see it, try it (it was my first experience of the keg version and I loved it).
Boyne provided me with a couple of corkers - a West Coast IPA at 6.8%, bags of flavours and aromas that you associate with the style, bitter finish. The Imperial Stout Sherry Cask at 10.8% was an incredibly smooth Russian Imperial Stout, no rough edges. Sweet subtle chocolate notes. There were other versions too, this was the best though.
Last, but, by no means least was Shanco Dubh Porter Barrel Aged from Brehon Brewhouse at 8.8%, this was a cask dispensed beer (the only one I think) - smooth chocolate boozy hit.
The above are merely the highlights, there were plenty of other beers I sampled and on the whole I found that the modern breed of Irish brewers know their stuff and are producing some really good/great beers. I'm hopeful that they'll start to export to the UK with a bit more regularity (Ireland Craft beers and Honest Brew are starting to make inroads).

Now for a mixture of disclaimer and thanks......To all of the brewers who took the time to speak to us, sharing their thoughts and knowledge, as well as their good humour - thank you (oh yeah, and thanks for the beers too, especially the ones I didn't pay for!). To fellow bloggers and beer enthusiasts, it was a pleasure to meet you all. To the organisers for inviting us and sorting our press passes, Tracey and Aoife for looking after us over the course of the three days and for sorting the room so that we could podcast with the lovely and wonderful Irish Beer Snobs. It was a real pleasure to spend so much time with them on the Friday and Saturday, they introduced us to just about everyone I think!

Lastly, apologies for the delay in writing up this post, having never attended a festival in it's entirety I didn't really know where to start. I hope it's given you a sense of just how much I enjoyed myself, which leaves me with only one thing left to say I guess - Sláinte. 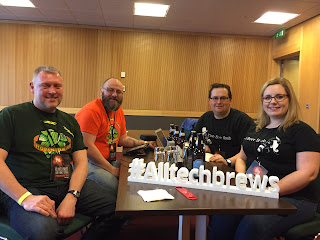 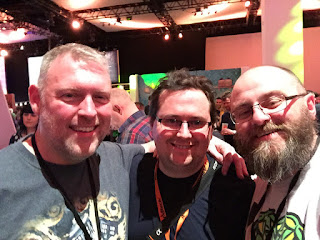