How did the beer festivals go? 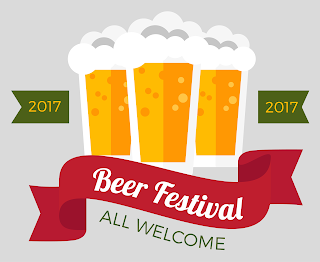 January and February are gone, and we are well into March....I attended the four festivals I alluded to in this post Let The Festivals Begin, so, I guess I should write a few words about them.
In order of attendance......
My first visit to the Manchester Beer & Cider Festival held Thurs 19th to Sat 21st Jan was bloody awesome! Actually, I could just leave it there, as it summed up how I felt about it on the night, the day after and it is still how I feel about it. The organisers got so many things right. The location - Manchester Central Convention Complex was previously a train station but I am sure quite a few people will remember it as the G-MEX Centre, a music concert venue which was very popular in the 80s & 90s. Dominating the view once you enter the hall were the brewery bars, they occupied the centre space, with the foreign beer bar and "others" at the back of the hall. Plenty of seating was available and a decent food choice was on offer. So far so good, what about the beer I hear you ask? Brilliant. Only one beer disappointed us and that was chosen by me (went by the name, bit like when I pick a horse, sorry Steve), but rather than list all of the good beers I had I will simply tell you that Track Sonoma was the best of the evening. Not only did it tick all the boxes - hops, aroma, flavour, bitterness all in fantastic balance,, Track had it on cask and wait for it, keg. Yes, you read that right. A CAMRA beer festival had a beer available on keg. What a joy it was to try both versions side by side, and you know what? The earth continued to turn on its axis.

Next up was the annual visit to my local festival in Colchester, held at the Arts Centre from Wed 25th Jan to 28th Jan. Centrally located ensures easy access by public transport, an essential I would say for the success of any beer festival. I met up with Karl and his better half Hannah, a regular occurrence at the local festivals I must admit, also present were Clayton and Mark Watson of Watsons Brewery. Mark provided my personal highlight of the evening, when he left, he took his empty cask home, on the bus, that's what you do when you are the smallest brewer in Essex! The cask beers on offer were of a good quality (I have often stated that sometimes beer festivals offer questionable quality where the cask offerings are concerned) and presented me with a variety of styles to choose from. I dived in at the deep end - Old Chimneys Good King Henry, a Russian Imperial Stout weighing in at 9.6%. So glad I did, as it was bloody divine and not only that, it ran out shortly after, proving that you shouldn't put off to later what you can do now. Thanks to Hannah for driving me home, thereby ensuring that I didn't stay till the bitter end!
The Chelmsford WINTER Beer & Cider Festival 2017 took place from Wed 15th to Sat 18th Feb and is held at the King Edward Grammar School (yes, KEGS) which is around 10 mins walk from the train station. The SXBottleShare was well represented and my girlfriend Michelle was able to join us as the festival is held during half term. So, before I even looked at the beer list I was looking forward to this one. 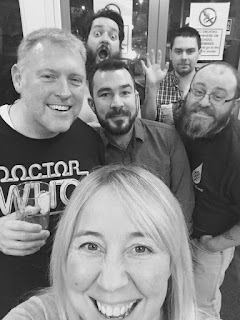 Also, it was a farewell to the guy in the middle - James, he is now off travelling the world, good luck to him, he will be missed. So, what was the highlight of this festival? That's easy. Mr Steve Bentall of Beer O'Clock Show and Hopinions fame signed up to CAMRA! Although, it didn't go as smoothly as it might have done, he is now a card carrying member - welcome Steve, here's hoping you stay more than a year this time. The choice of beers was pretty fab, and if you are a cider lover, a decent selection of alcoholic apple juice was also available to you. Now some of you may remember a certain Manchester brewer stating that they were going to stop brewing cask beer, well, the goodbye tour came to Essex with three offerings, but, the best beer of the festival was Santa Meurte, an impy stout brewed by Track and Odyssey, if you see it, try it, if not, bad luck as it was superb - loads of chocolate, subtle hints of vanilla (thankfully, as I hate too much vanilla in my beers) with a satisfying level of bitterness, oh yeah and it came in at 9%.....whoops!
So, that's it, or is it? No, of course not, I went to Dublin to attend The Alltech Craft Beer Festival, however, that deserves a post all of its own......it's still a work in progress though.

All three CAMRA beer festivals I attended in Jan and Feb have gone some way to changing my views regarding the quality of beer being served from cask on gravity - I honestly didn't have a badly dispensed beer. The option of keg in Manchester was welcome and hopefully changed a few hearts and minds - good beer is good beer regardless of the method of dispense (for the record, I thought the Track Sonoma was lifted to another level on keg).
BUT, still no bloody water readily available, how can this be so difficult? We, as an organisation promote sensible drinking yet free running water isn't readily available, also, what about when I switch between different styles of beer, surely a rinse would be a good idea? I simply do not understand.
On that bombshell, time to sign off and grab a peppermint tea (given up the proper stuff for Lent).

Apologies - I have no idea why there is a long blank space at the end of this post, nothing I do seems to correct it!!!