While i have been off work ill, feeling rather sorry for myself, I started thinking about the month just gone.
What were my November beery highlights?
Turns out there were a few, as a quick look at my diary testifies.
The SXBottleShare on the 3rd, kicked off the month in style, this was followed up by a successful beer tasting at work on the 4th. A couple of days later on the 6th, prior to a meal in Billericay, I decided to pop into the Billericay Brewing Company tap room, which had recently been done up, enjoyed some nice beers in a very comfortable venue, @HalfPintGent joined me, nice to see you fella.
Next up was the Home Brew festival at the Victoria Inn on the 7th (Read all about it here - Anglia Craft Brewers Festival).
On Sunday 8th, a visit to the two tap rooms in Maldon, both of them are different, but, both are well worth a visit. 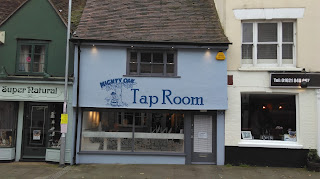 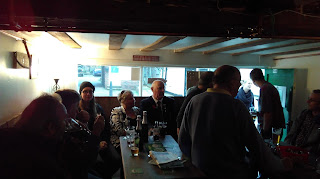 A few days off was called for. Time for a break.
On the 12th Nov, Hop Burns & Black was the venue for the Beer O'clock Show Live Lock-In, an All Black special, showcasing dark beers from Kiwi land, and what great beers they were. A good night had by all, only slightly marred by a surly London bus driver who ignored the bus stop I wanted to get off at.
13th to 16th Nov - Weekend away with the "boys" (we are all in our 40s.....) to Butlins in Bognor. Butlins and Bognor are beer deserts, only a visit to Wetherspoons and a few choice beers packed in my suitcase broke up the holy trinity of Doom, Fosters and Stella.
Another couple of days off preceded my first ever trip to the Rochford Beer Festival, held in the Freight House (17th Nov). A lovely building right beside the mainline train station, great selection of beers and bars. I will be back! 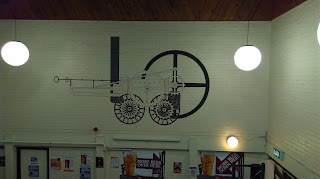 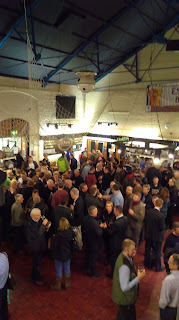 Last, but, not least was The London Brewers Market in Spitalfields on 28th Nov.
An event organised by Five Points and quickly becoming a fixture in my beer calendar, usually held twice a year - summer and winter.

Naturally, there were some very good beers sampled, here's a snapshot of some of them:
Ypres - 2010 Double Barrel Aged Fob by De Struise Brouwers a Flanders Oud Bruin. Think of Rodenbach Grand Cru and you'd be in the right ball park.
Defacer by Weird Beard, a Triple IPA weighing in at 11%, but, not as boozy as you might expect, but, smooth and delicious.
Born To Die 27.11.2015 by Brewdog, a Double IPA, that is brewed to be drunk not cellared. Well worth the hype.
iStout by 8 Wired Brewing Co., a Russian Imperial Stout
Pompelmocello by Siren, an American IPA. Like having a breakfast grapefruit juice (thanks @Clayfish for the ideal description).
Jaipur by Thornbridge, an English IPA (first time on cask for me) and one of my all time favourite cask beers, Landlord by Timothy Taylor, English Pale Ale. I had both of these at the Rochford beer festival and if these had been the only two beers on, i would have been a happy man.
Ola Dubh 18 Year Special Reserve by Harviestoun, an Imperial Porter, according to Untappd. A glorious rich dark beer according to me, savoured while watching Strictly Come Dancing (who knew?).
Heavy Water (Sour Cherry And Sea Salt) by Beavertown, Imperial Double Stout.
You get the smell of salt on the nose, and on the palate, then a gentle hit of the sour cherries. Very refreshing for a 9% beer, quite a light mouthfeel despite the name. The stout needs a bit more time to develop, in my opinion, so, this will be my first ageing of a canned beer, I wonder how it will turn out?

But, my top two (sorry can't separate them), are Born To Die and Heavy Water. Two fabulous beers where the hype delivered. Thank you Brewdog and Beavertown.