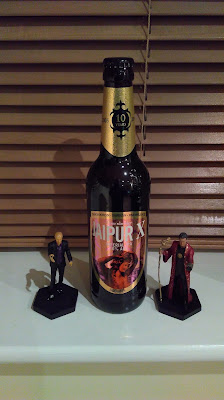 I'm guessing most people recognise this one!! My last bottle (woe is me) of Jaipur X, a 10th anniversary beer produced by those lovely people at Thornbridge.
Can you believe Jaipur was first brewed 7th June 2005?!?! Time flies by in the beer world I must say.

I have had this out of the bottle 4 times since it first came out earlier this year and i think this might be my favourite tasting to date.
First time i thought ok/interesting, nothing special. Next couple of times it had really mellowed off, very enjoyable.
Today however, i feel like i am drinking an Imperial IPA. A lovely aroma tells me that it is a big beer ahead, follwed by tangy citrus, ending with a bitter finish. Hint of London murky visually.
All in all - great! (Girlfriend started sipping and likes it....get off!!!)

The Autons (on the left hand side) saw in the third Doctor in his first adventure, and repeated this feat, by being in the very first story when the series was rebooted in March 2005 which introduced us to the 9th Doctor as portrayed by Christopher Ecclestone, 16 long years had passed.....i was HAPPY.
On the right hand side, Lord President of the Time Lords - Rasillon, who appeared in David Tennant's swansong in Jan 2010 - top geek moment was discovering that Timothy Dalton was Rasillon, Bond had become a Time Lord!!!!
Posted by mjpo007 at 05:00