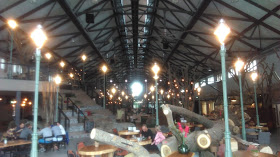 The view inside (full disclosure - none of my pictures will do the place justice).

Eight hours in one venue in a city as eclectic as Berlin probably tells you everything you need to know, in fact, I could have stayed till closing time (which is midnight and I arrived at noon). The inclement weather proved to be a real bonus, that, and the rest of the stag party turning up at different times throughout the day. There'll be a second blog along soon detailing the rest of the weekend in Berlin and in particular a visit to another craft brewer. (One of my brother lives in Germany and is getting married later this year, hence the stag weekend)
What to say about this cathedral to beer? Well, I guess the first thing to try and get across is the sheer scale of the place, it is enormous, not big, bloody enormous in fact! Located at the site of a historic gasworks facility in the Mariendorf neighbourhood of Berlin, it seems as if no expense has been spared on both the exterior and interior decoration. Plenty of seating, loads of tables (with and without service) and seating at the bar (which is where I spent most of my time, as close as possible to the taps). It feels like you could fit a football pitch in and still have space left over! There are mezzanine levels, private tap areas and a room for private dining, I went for a good wander round and was just in awe of the place. Clientele was made up of men, women, children, young and old, it felt a very comfortable place to be in, with music playing in the background which definitely matched the slightly eclectic feel of the place, and, because the speakers were attached to the rafters, shouting at each other was optional rather than mandatory (thanks Stone, appreciate that). 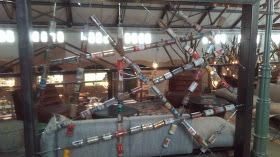 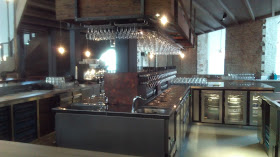 The beers..........there are 50 on tap, over half of them from Stone, with around 10-15 of them being brewed in Berlin, mere feet away from where they are served, who doesn't want brewery fresh beer eh? The only disappointment for me was that the Go To IPA had run out!, yes, seriously, it had all been drunk (blame the official opening three nights before I got there - damn).

However, as previously stated I spent 8 hours there, best I share my beery highlights:
IPA Dry-Hopped w/Callista Hops - Unfiltered (Nice subtle citrus notes coming through, dry finish, easy drinking bitterness)
Den Gottern Dammert's Ein Bisschen IPA (Very easy drinker of an IPA)
Stone Ruination Double IPA 2.0 (Brewery fresh.....bloody brilliant)
Stone IPA (No comment required)
2008 Stone Old Guardian Barley Wine (Red wine barrel aged barleywine....yummy!)
There were other beers drunk and I revisited one or two of the above also, but, all of the above scored 3.75/5 or above on Untappd, hence the mention.

The service was top notch and a special shout out to Matt (I'm sure that was his name) who looked after us for the bulk of the day, really appreciated his time and knowledge (and the sample tasters, not sure my brother and his mate appreciated the one with jalapeno in it!).

This will become a destination place to visit for a lot of people, I suggest that you become one of those people, you'll love the experience - guaranteed. 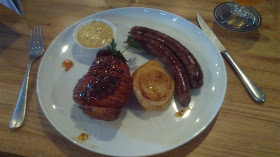 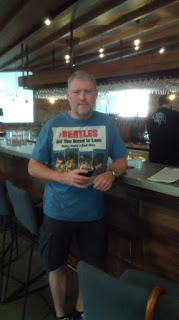 (Finally, me at the bar - natural pose)
Find out more here - http://www.stonebrewing.eu/visit/bistros/berlin
﻿
Unknown at 09:28
Share